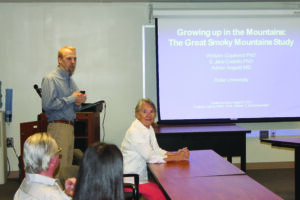 “It is most certainly not a study of kids anymore,” said William Copeland, Ph.D. who said the study includes kids from the 11 counties located west of Buncombe County.  “We really wanted to get a sense of what was a representative group of kids from this area in 1993.”

Copeland was joined at Monday’s presentation by British husband-wife team of E. Jane Costello, Ph.D. and Adrian Angold, Ph.D. who started the study.

Trained interviewers met with the child and their parents to monitor behaviorial and emotional functioning as well as garner information about physical health, future plans, education, work/income and “derailments” such as substance use and abuse. 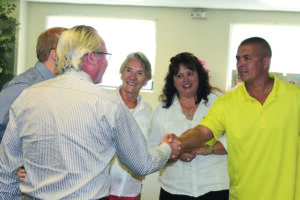 “Over 60 percent of the kids have met the criteria for a disorder by the time they reach adulthood.”

Obesity is another area of interest and concern for researchers.  They checked mean BMI (body mass index) readings on the kids and found that the American Indian boys and girls in the study have much higher BMIs than their non-Indian counterparts.

“Clearly, weight issues are a problem for each group, but it is especially true for the American Indian children,” he said.

He related that all of the Indian kids who had diabetes in the course of the study were in the chronically overweight group.  Some risk factors for obesity for both Indians and non-Indians included: being a teen mother or a single mother, having parents with a history of mental illness, or poverty.  Risk factors that seen to affect only Indian kids include: violence between parents, child being teased or bullied or the child has few friends.

Copeland pointed out that those risk factors were certainly not unique to the Indian kids, but that they were “disproportionately affected”.

The researchers related that the age 30 interviews are ongoing and future updates of this study will be forthcoming.