Makala Washington, a third grader at New Kituwah Academy, reads a book in the Cherokee language as just the right lighting grazes off of her face.  Click!  Chris McCoy captures an image in time. 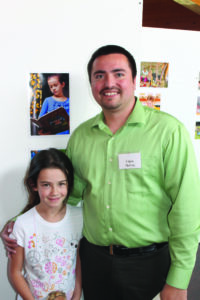 McCoy was named the first place winner in the adult division of the Cherokee Preservation Foundation (CPF)10th Anniversary Photo Contest for capturing the moment.

“The picture itself represents the vision that I think a lot of the leadership in town have had for a long time,” said McCoy.  “The language revitalization is of utmost importance – the number one priority – I believe because that what makes us who we are, the language, the culture, the history.  Being able to take a shot like that and have it here forever is a big thing.”

He added, “Overall, as far as the competition goes, it’s awesome.  Everyone that submitted did a great job.  There isn’t a bad picture here and kudos to the Cherokee Preservation Foundation for putting on such a wonderful event for the people.  The money is not important.  The opportunity to come out and meet people and showcase what we’ve captured in our community, that’s important and that’s what we need more of.”

Tiffany Frady won first place in the youth division.  Honorable Mentions were given to Nick Cucumber and Frady.

The contest was open to those living on the Qualla Boundary or in one of the seven surrounding counties, and photos had to reflect one of the three areas funded by the CPF including: cultural preservation, economic development or environmental preservation. 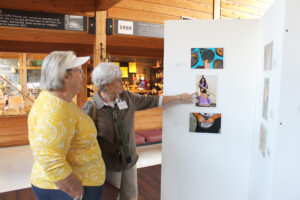 Painttown Rep. Tommye Saunooke and Susan Jenkins, CPF executive director, look at some of the photos at Thursday night’s reception.

“We wanted to really engage the community in a way that they could use their skills both intellectually and in a camera to really be able to reflect, from their perspective, one of the three areas or more than one of the three areas that we fund in,” said Susan Jenkins, CPF executive director.  “With this being our 10th Anniversary, we just thought it was really important to somehow engage, not only adults, but youth as well.”

In all, there were 15 adults and seven youth (under 16) who entered a total of 59 photos into the contest.