The Democratic National Convention will kick-off with events on Monday, Sept. 3 in Charlotte and will conclude on Thursday, Sept. 6, and the Eastern Band of Cherokee Indians has received a personal invitation to the events. 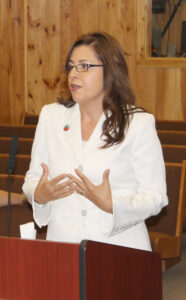 Dr. Frances Marquez, Democratic National Convention Office of Public Engagement manager, speaks to tribal leaders in the Council House on Wednesday, Aug. 22 to invite them and other tribal members to the Convention. (SCOTT MCKIE B.P./One Feather)

Dr. Frances Marquez, DNC Office of Public Engagement manager, made the trip from Charlotte to Cherokee on Wednesday, Aug. 22 to meet with tribal leaders and invite them and other tribal members to the Convention.

“As the manager of Public Engagement, I have been tasked with driving around to communities throughout North Carolina, South Carolina and Virginia to invite community members.  With this convention, President Obama and the First Lady wanted the most grassroots convention as possible to bring in community members,” she said.  “With the convention being held in Charlotte, they wanted to make sure that local people would be invited and that they would be able to learn about the process of what was going on with the Convention and to be able to participate.  We’re trying to make it as accessible as possible.”

“This is an historic Convention.  Charlotte is the first city in the history of all of the Democractic Conventions to host an opening day festival.  It’s called CarolinaFest and so I’m here to personally invite all of you and your community members to come down to that festival.”

CarolinaFest will be held in downtown Charlotte on Sept. 3 from 12-6:15pm after the Labor Day parade and is featuring live music, youth activities, food booths, discounts to local museums, and a Legacy Village highlighting various projects in Charlotte.

The first two official days of the Convention, Sept. 4-5, will be held at Time Warner Cable Arena, and President Obama is scheduled to accept his nomination on Sept. 6 at Bank of America Stadium.

“The importance is that we are at the table,” said Vice Chief Larry Blythe who is planning on attending the Convention.  “It’s not that we necessarily show our support for the Democrats or the Republicans, but we have to be there, we have to interact with the folks that are going to be our future decision-makers and hopefully have input from that side.”

Painttown Rep. Terri Henry is also planning on attending.  “It gives us some national exposure not only at the Convention, but especially when we have things that we are trying to do with our work with the federal government.  So, we get national exposure and we see that the interests of the Eastern Band and Indians in general are represented.”

For more information on the Convention, visit www.demconvention.com.