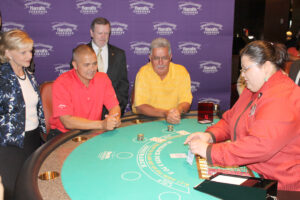 Gov. Perdue commented, “Some of you have been friends of mine for years, and I’ve watched this Tribe grow.  I’ve watched it move and change and figure out a different way to make a priority list for all of your people and for the western counties as well as for the whole state of North Carolina.”

She thanked the Tribe and the General Assembly for their spirit of compromise to make the compact happen.  “This is a great day…and, it’s been a long time coming.  I was around back in the nineties when Gov. (Jim) Hunt brought a group of us together and we began the discussions about the original compact.  We began to talk about what it would mean to this part of the state if we could actually have an economic development engine.”

“We understood that something could happen here that would bring magic to the people of western North Carolina.” 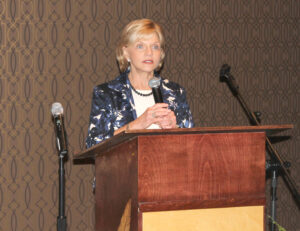 Gov. Perdue said that as she toured the casino she realized it wasn’t about live gambling, it was about economic development.  She said for the past 20 years the Tribe has been a leader in the nation and world in gaming and have done it “without a hint of misbehavior”.

Principal Chief Michell Hicks said, “It’s been a long journey.  I guess I’ve been waiting for this day to take a deep breath.  I know a lot of people have worked really hard to get us to the point where we’re at, and I stand here very proud today.”

“Even though it was hard times getting to the point where we are, we can’t look back.  It’s time to look forward.  You can see that great things can be done when you put great minds to it, and so, it’s a proud day and I’m just glad to take a deep breath.” 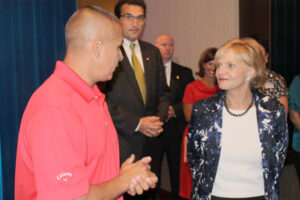 Chief Hicks and Gov. Perdue chat prior to the start of Tuesday’s event.

“We’re just proud of everything that we’ve been able to accomplish as a Tribe.”

“At the end of the day, the right people at the right time made this happen.”

He told the group a short story about a moment in Raleigh a few months ago when Chief Hicks was set to address the State Republican Caucus.  “He was about to go in, and they’re a tough group and they had their issues.  They weren’t sure they were doing the right thing.  Chief and I stool in the hallway and we prayed, and I said, ‘Chief, it’s going to be ok.  Just stand there and speak from your heart.’” 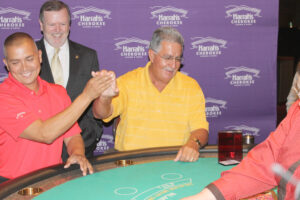 Chief Hicks and Vice Chief Blythe high-five after the official hand of blackjack.

Vice Chief Blythe continued, “He (Chief Hicks) elevated himself in my eyes and truly became a Chief of the Eastern Band of Cherokee Indians on that day.  With the words he spoke and the conviction he had, the dedication he showed to this Tribe and our people.  It’s just unbelievable what transpired that morning…I want to thank you Chief for what you showed that day and for what you continue to show every day.”

Tribal Council Chairman Jim Owle stated, “It’s a great feeling.  It’s great to see all of the people here.  I’m just glad to see it finally come and that we can do this for our people.”

“I just feel that this brings us to a new level with our gaming, and I’m looking forward to see where it takes us in the future.”

Gov. Perdue signed the legislation on June 6 that changed state law to allow live table gaming at Harrah’s Cherokee per an amended gaming compact signed in May.  Tribal Council gave their stamp of approval on Friday, June 8, and the Department of Interior gave final approval on Friday, Aug. 3.

Per the compact agreement, the Tribe will pay the state a percentage of gross receipts from the table games, which will be used for education within the state, over a period of 30 years including:

– 4 percent for the first five years

– 5 percent for the next five years

– 6 percent for the next five years

– 7 percent for the next five years and

To view more photos from this event, visit the One Feather photo gallery at: