The Eastern Band of Cherokee Indians is moving forward in its goal of running a child support services program.  The Eastern Band will be the first tribe in Region IV of the federal Office of Child Support Enforcement to run its own program. 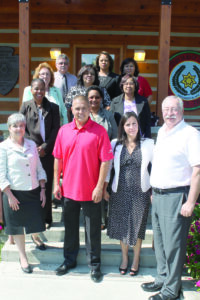 “We’re very pleased with our progress,” Principal Chief Michell Hicks said during a meeting on Tuesday, Aug. 21 with state and federal child support officials.  “Once we get our model in place, we’re going to have it right.  Dollars are only a part of it; it’s about families.”

Several years ago, the Tribe joined a child support services consortium operated by the Modoc Tribe of Oklahoma which includes 14 tribes in Oklahoma.  The Tribe is currently in the process of leaving the consortium to run its own program.

She said during the meeting that final approval of the Tribe’s new program will be forthcoming.

Chief Hicks related that the Tribe is in the process of overhauling its entire child and family services program.  “It is all about the children.  We do know that we’re going to change a few things.”

Teretsky added, “Child support is money, but it also has an emotional content.”