The Eastern Band of Cherokee Indians was represented in at the National 4H Conference Center. The Cherokee Youth Council sent two young men to represent the Tribe at the 2012 Intertribal Youth Summit including Nick Cucumber and Josh Taylor. 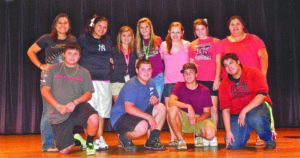 The summit held over 200 youth and advisors from all over the US including Alaska.

“We are so excited that our youth joined together representing the United Keetoowah Band, Cherokee Nation and EBCI,” said Sky Kanott, Cherokee Youth Council program manager.  “This summit gave our youth the opportunity to go into the Senate building and the Eisenhower Executive Office building in downtown DC, along with an information fair that displayed a tremendous amount of American Indian resources to reach out to across the country.”

“Nick Cucumber, of the Painttown community, and Josh Taylor, of the Yellowhill community, were amazing Eastern Band representatives,” Kanott added.   “These young leaders formed many new relationships during their stay and gained an overwhelming amount of knowledge. They have made it a point to set new goals for themselves and our tribe and I can’t wait to see what they do in the future.”