Cherokee Indian Hospital was nominated for and received the 2012 IHS National Behavioral Health Achievement Award in the area of Community Mobilization in Substance Abuse Prevention.  The Cherokee Indian Hospital Substance Abuse Task Force has been very active in developing a multidisciplinary outpatient-based opioid treatment program.  This has been done through a partnership of the Hospital and the A Na Le Ni Sgi Behavioral Health Program. 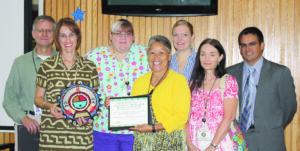 The format of the program includes group visits and learning sessions and motivational change techniques.  The Task Force has involved community elders to address the treatment groups.  The inpatient department of the Hospital has also developed policies and protocols to facilitate admission for detox and entry into the program, which continues as an outpatient.