On July 11 and 12, Right Path Leadership Program, “Du-yu dv-I”, participants learned about tribal governance on many levels.  Presenters on the history of governance included Robert Conley, Distinguished Sequoyah Professor at WCU; Tom Belt of the Cherokee Studies Department at WCU; and Sarah Sneed, a graduate of Harvard Law School.  Sneed has provided technical assistance for the Governing Document Review Committee, authorized by Tribal Council Resolution #271 to research and report on an EBCI constitution. The panel discussed the history of Cherokee treaties beginning in 1540, when first contact was made, to present day, where the EBCI functions under a 1986 version of a North Carolina State Charter. 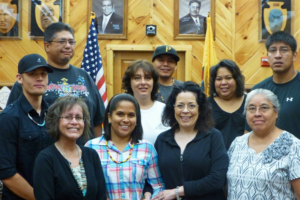 Leaders learned that before contact, Cherokee governance was characterized by consensus decision-making in a matrilineal social system.

“Traditionally, we have had a tribal court system that operated from the clan system,” noted presenter Bill Boyum, EBCI Chief Justice,   “As we began to adopt the white people’s court system, things changed.  The current Charter does not provide for three separate branches of government, and Tribal Court is currently part of the EBCI Executive Offices,” he said.

Boyum noted that EBCI tribal court was established in 2000 and has since processed 4,000 non-felony cases a year. Terri Henry, Painttown Tribal Council member, also talked to the group, discussing the work of Tribal Council members as well as term limits for elected officials and a code of ethics.

Mike Rogers, who was serving as interim superintendent of the Cherokee Central Schools at the time, met with the Right Path Leaders on July 12.  He noted that while the Cherokee Schools are not a North Carolina school, they do follow the state curriculum.

Rogers described how the School Board sets policy for the school and the superintendent works with faculty and staff to enforce policies.  “We need more enrolled members to become teachers,” he emphasized.

Juanita is the program manager for the Right Path Leadership Program.