Football champions may be crowned in the winter, but they are most definitely won in the grueling late summer heat and humidity of August.  The Cherokee Braves, coming off a 3-8 season, are working hard this pre-season and are reveling in a role as an underdog in the Smoky Mountain Conference. 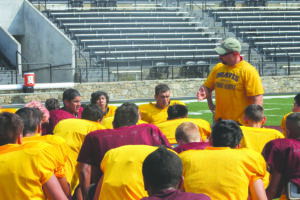 “I like where our team is at right now,” said head coach Craig Barker.  “We’ve got quite a few kids out right now working hard.  We’ve had a great summer, a great summer in the weight room, a great summer so far out here on the football field, and I’m looking forward to a great season.”

“I know everyone is going to be underestimating and that’s just the way we like it.  We’ve got some great kids and we’re going to surprise some people.”

In a preseason poll by NCPreps.com, the Braves were picked to finish sixth this season in the Smoky Mountain Conference.

“That’s a slap in the face and that’s how we take it,” said Barker.  “Nobody is counting on us to beat anybody.  They think the Braves are down, and that’s fine.  Let them have their opinion.  Hopefully, we’re going to prove a lot of people wrong this year.  That gets in our craw, gives us a chip on our shoulder, and we’ve got a lot of motivation to prove people wrong.”

Barker added, “Hopefully, we can fight that injury bug and stay healthy this year and get these players to play fast and with aggressiveness and play Cherokee Braves football.  We’re a hitting team, and we’ll do what’s necessary to win a football game.”

“We’ve got a lot of athletes, and we’re going to try to mix it up.  In this day and age, you have to have a passing game.  You can’t be one-dimensional, and we’ve got some athletes out here that can catch the ball and throw the ball, and of course we have a great running back in Dorian Walkingstick.”

Walkingstick, a senior, is coming back this year after missing last season due to a hamstring injury sustained in the season opener.  During the 2010 season, he lit up western North Carolina rushing 308 times for 2,139 yards and 18TDs.

“He had a great offseason and is one of the strongest kids I’ve ever coached and probably the best running back I’ve ever coached,” Barker said of Walkingstick.  “He’s top notch.  He’s a special, special athlete.  He’s 100 percent back.  He’s ready to go.”

Walkingstick commented, “I’m looking forward to a pretty good season.  It’s going to be my last year as a high school player, and I just want our team to do good.”

Logan Woodard is set to take the snaps as quarterback for the Braves this season.  “We’re planning to win every game possible.  It feels good to be back.  We’re looking forward to a good year.”

Barker said one of the main strengths of the Braves this season is their offensive line which will be anchored by senior Justice Littlejohn, a four-year starter for Cherokee.  “We have a way better team than we had last year.  We’re going to go a long ways this year.  I’m looking forward to it.”

Cherokee is set to open their 2012 season on Friday, Aug. 17 at home against the Smoky Mountain Mustangs.