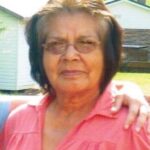 She was born in Cherokee, and was the daughter of the late Owen Smoker, Sr. and Ida Teesateskie Smoker. In addition to her parents, she was preceded in death by her husband, Jesse Jumper, in October 2006.

An online register is available at https://www.townson-smithfuneralhome.com/.