This is one of a series of sculptures by Hill currently on display at the Museum of Arts and Design in New York City. (Photos courtesy of Luzene Hill)

Her work is included in shows in New York City and Russia.  The Museum of Arts and Design in New York City is featuring seven of her sculptures in a show entitled “Changing Hands: Art without Reservation 3”.  The show will continue at the Museum until Sunday, Oct. 21 at which point it will begin a three-year tour of the United States and Canada.

The Ekaterinburg Museum of Fine Art in Russia is featuring five of her drawings in an exhibit entitled “Native Art in Russia”.  Once that show is complete, her work will be featured at the Biennial in Novosibirsk this fall.

Hill, who is working towards a master’s degree in fine art from Western Carolina University, has illustrated three books for the school’s Cherokee Studies Language Revitalization Project including The Grouchy Old Lady, Spearfinger, and Bear Man.

Following is a brief interview with Hill:

I returned to college in the 80’s, planning to study interior design.  I took my first art class, Drawing 101, at Georgia State University.  I loved being in school and making art, but family responsibilities required that I put art aside for more than a decade.  In 1996, I began to focus again on making art and exhibited my work for the first time at Indian Market in Santa Fe in 1997.

A young Russian woman stands on her tip-toes to take a photo of one of Luzene Hill’s works at the Ekaterinburg Museum.

2. You are a sculptor, a painter and an illustrator.  Which medium is your favorite?

I love drawing because of its intimacy and immediacy.  However, for the past few years I’ve been creating multi-media conceptual installations, which can incorporate a variety of materials and techniques – drawing, photography, video, performance.  My current thesis work at WCU will be an installation, on display in October, which addresses the issue of violence towards women.

3. You currently have works in shows in New York City and Russia?  Can you tell our readers which pieces you have in each show?

For the Museum of Arts and Design in New York, I created a new seven sculpture installation inspired by Native American myths about how the constellations were formed.  “Becoming” is the title of this work and depicts young girls being transformed from humans to stars as they are pulled into the sky to become The Pleiades.

Five recent drawings are featured in the exhibit in Russia.  These drawings reflect a recurring theme in my art – vulnerability and the fleeting, capricious nature of life.  I use charcoal, ink and tea stain on paper. 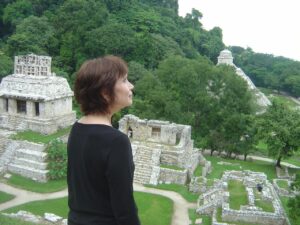 4. How does it feel to represent Cherokee art at such prestigious international art shows?

I’m honored to be included in these important exhibits of contemporary Native American artists.

5.  What do you hope the New York and Russian audiences take away after seeing your art?

Art is a language, an individual expression that comes from the artist’s core.   A viewer of the art responds to it from that same place, based on their individual experiences.   This communication doesn’t require translation.  One of the photos from the opening reception in Ekaterinburg shows a young Russian woman on tiptoes taking a picture of one of my drawings.  That young woman, from another culture, another generation, was responding to my work.   At that moment we were communicating.