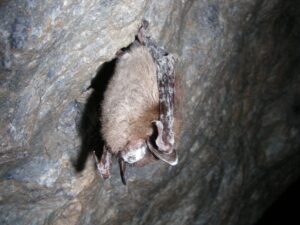 The Cherokee Fisheries and Wildlife Management department is currently working with federal and state partners to understand what impacts white-nose syndrome is having on local bat populations. (Photo by Marvin Moriarty/USFWS)

White-nose syndrome, a disease linked to a fungus unintentionally introduced from Europe, is causing alarming mortality in cave dwelling bats.  It has been estimated that over 5.7 million bats have been killed since the disease was discovered in 2006.  This cold-loving disease continued its spread throughout eastern North America this past year and has now been confirmed in neighboring Great Smoky Mountains National Park and as far south as the state of Alabama.

White-nose syndrome is named for the white fungus that grows on bat’s muzzles and other parts of their bodies while they hibernate in caves.  The disease has been linked to abnormal awakenings during hibernation that result in the depletion of critical reserves of energy and water.  At this time scientists are still trying to understand precisely how the fungus kills bats and there is no known cure for the disease.

Bats are truly more deserving of our appreciation than our fear.  Eleven different species of bats fly throughout the Cherokee night skies from the spring through the fall.  Each of these winged eating machines can consume up to 1,000 mosquito-sized insects in just one hour.  This results in the elimination of billions of insect pests that harm forests, damage agricultural crops, and spread human disease.  A recent study published in the journal Science concluded that bats contribute at least $3 billion dollars to the national economy in the form of agricultural pest control services.

The Cherokee Fisheries and Wildlife Management department is currently working with federal and state partners to understand what impacts white-nose syndrome is having on local bat populations.  Tribal staff use a variety of tools to study bats including nets to capture flying bats and acoustic monitoring devices to record ultra-sonic bat calls.  The EBCI also works diligently to protect bat roosting trees during critical reproductive periods.

Bats play a critical role in the natural world and deserve our respect and protection.  There are many things you can do to help bat populations including reporting observations of sick bats, putting up a bat box on your property, and spreading the word on the importance of bats and the problems they face.  The Cherokee Fisheries and Wildlife Management program is currently working with tribal members to help bats by giving away limited number of free bat boxes.  Info: Mike LaVoie 497-1802