HAYESVILLE – Anthropology students at Western Carolina University are experiencing hands-on learning in Clay County through archaeological digs and participation in the ongoing construction of an outdoor museum exhibit that portrays a Cherokee village from 1650 through 1750.

The connection to Clay County began in 2005, when interested parties reached out to Jane Eastman, WCU anthropology professor and director of the WCU Cherokee Studies Program, to conduct a field study on the site of a planned housing development near Spike Buck Mound and the Quanassee village archaeological sites in Hayesville, about 60 miles southwest of Cullowhee. Evidence suggests that the mound and the areas surrounding it were a substantial Cherokee settlement. The development never materialized, but since 2006 Eastman has worked toward a broader picture of the site, inhabited as early as the 14th century, by leading students on summertime digs there.

Since the summer of 2009, Eastman has engaged her students in the development of the outdoor Cherokee Homestead Exhibit. A couple blocks from the central square of downtown Hayesville, the exhibit is a project of the Clay County Communities Revitalization Association in partnership with the adjacent Clay County Historical and Arts Council Museum. The exhibit, under construction since 2007, features to-scale replicas of a Cherokee summer house, winter house and corncrib. This is set against the backdrop of a large-scale mural with details of elements of Cherokee life and contemporary metal sculptures referencing the seven Cherokee clans and other symbols of the tribe. 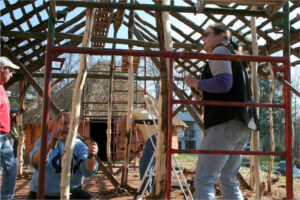 Jane Eastman, right, professor of anthropology at WCU, offers students including Tina Crowe (left) a hands-on learning experience through construction of a Cherokee summer house at an outdoor exhibit in Hayesville in 2010. Students also helped build the winter house in the background. (Photo courtesy CCCRA)

WCU students have helped strip and set posts for the structures, weave river cane siding onto the structures, and in the case of the winter house, pack the woven cane with mud for its wattle and daub construction. Eastman, a consultant on the project since its inception, and her students have visited the exhibit twice this spring to strip poplar and locust logs with traditional drawknives for a future open-air work/demonstration space and perhaps a replica removal-era log cabin.

Beyond contributing to what Eastman considers a valuable project, the outings give students an understanding of Cherokee life in the past. “I think it becomes much easier to imagine what life was like for a Cherokee family and to appreciate their skills when you have some experience to relate to other than simply what you’ve read in a book,” Eastman said. “To me, it releases the imagination in a way that is otherwise impossible.”

Her students agree. “Learning some of the ways that they’ve done stuff in the past is informative for the future,” said Jennavieve Smith, a senior anthropology major from Franklin and one of 12 students who traveled to Hayesville in April to work on the project.

“The process of developing this exhibit would have been much more difficult without the help of Jane and WCU students,” said Rob Tiger, a WCU alumnus, Clay County native and active member of the Clay County Communities Revitalization Association, commonly known by the shortened CCCRA. The organization’s members envision the outdoor Cherokee exhibit and a nearby connector trail now under construction as enhancements to local quality of life and a regional draw for visitors. Already it serves as an outdoor classroom for regional schoolchildren and was the setting for a 2011 Cherokee Heritage Festival that attracted approximately 300 people. A second festival is planned for Oct. 20.

Among other projects, the CCCRA is responsible for the exterior restoration of the historic Clay County Courthouse and was a primary collaborator in the construction of the nearby 14-mile Jackrabbit Trail system for hikers and bikers.

For more information about the WCU anthropology program, contact Eastman at 828-227-3841 or jeastman@wcu.edu.