The largest bald eagle nest on record weighed over two tons.  Eagles can not only swim, but their eyesight is four to five times better than that of a human with 20/20 vision. 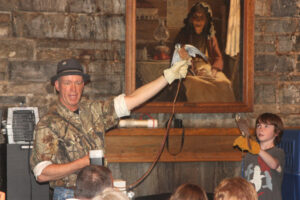 Michael Skinner (left), executive director of the Balsam Mountain Trust, shows the crowd and Brennan Foerst (right), of Cherokee, the finer points of kestrals during a birds of prey program at the Oconaluftee Multi-purpose room on Thursday, April 26. (SCOTT MCKIE B.P./One Feather)

Those amazing facts were just a few given by Michael Skinner, executive director of the Balsam Mountain Trust, at a Birds of Prey program he facilitated at the Oconaluftee Multipurpose Room adjacent to the Oconaluftee Visitor Center on Thursday, April 26.

Skinner, an ecologist and naturalist and former host of Georgia Public Television’s “Georgia Outdoors”, brought several different species with him including an American bald eagle, a red-tailed hawk, several kestrals, and an eastern screech owl.

“The one thing I don’t do is force a bird to do something they don’t want to do,” he said.  “Their health is paramount to us at the Nature Center.” 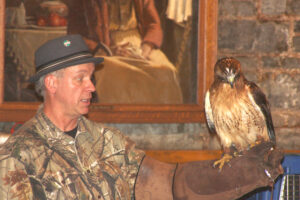 The largest bird he brought with him was a bald eagle named Freedom.  His original name was Doby because he got out the nest too early and was bitten in the hind quarters by a Doberman.  That encounter caused follicles in his tail to break and he sometimes will molt all of his tail feathers at one time making flying difficult.

Skinner said the 6 ½ pound bird has over 7,000 feathers.  Freedom is currently 13 years old, and Skinner said bald eagles can live up to 30 years in the wild and up to 50 years in captivity.

And, the majestic birds can be found in more places than you might think.  “They’re (eagles) nesting here on Lake Fontana.  There’s at least one pair of nesting bald eagles in every state in the lower 48.” 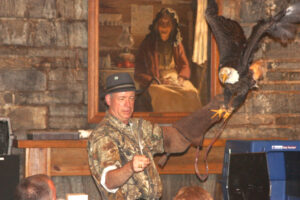 Freedom, a 13-year-old American bald eagle, got a little restless towards the end of the program.

He said some have also been seen on Lake Junaluska, but their close proximity to humans sometimes comes at a price.  Skinner told of a four-year-old female bald eagle that was killed in Maggie Valley last year with a .22 rifle.  The killer was never caught.

“The good thing about the bald eagle is that they’re making a comeback,” he said.  “Bald eagles came off the endangered species list in 2004.”

Sometimes Skinner will help rescue birds in dangerous and sometimes just odd situations.  For example, Cheyenne, a female red-tailed hawk he brought with him for Thursday’s event, came from a Nature Center in northern Illinois.  The Center got the bird from a man who took her out of the wild illegally and kept her on his property in a broken-down car.

Skinner said safety is a main concern when handling these animals.  “When you work with birds of prey or animals who have the potential to kill you, you have to know what you’re doing.”

Cheyenne is currently four years old and Skinner said she can live in captivity up to 35 years.

During the program, Skinner dispelled some common misconceptions about birds of prey.  When showing Hanto, a barn owl, he told the crowd that owls typically can turn their heads 240 degrees, not 360 degrees as is commonly believed.

For more information on the Balsam Mountain Trust, visit www.bmtrust.org.

For more photos of this event, please visit the One Feather photo gallery at: