Cherokee Transit hosted the Sixth  Region A Roadeo on Thursday, April 19 with drivers competing from the Qualla Boundary and Macon County.  The purpose of the roadeo is to test driving skills, pre-trip vehicle inspection, and professional habits. 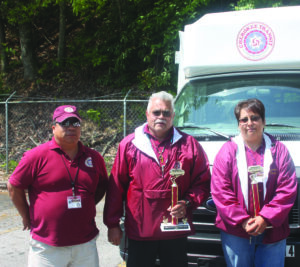 The top winners from Cherokee will compete in the North Carolina State Roadeo later this month in Wilmington.

Kathi Littlejohn, Cherokee Transit manager, said, “The Roadeo is a fun way to test ourselves on skills we have to use everyday and at the same time, meet other drivers in our area who work at similar jobs.”