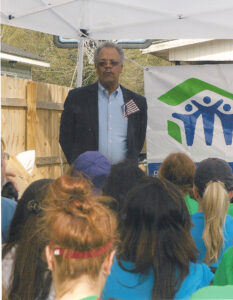 Robinson, who lives in Biloxi, Miss., received the award for his outstanding achievement in the category of Sustainable Community Solutions.  He has worked on housing and other issues on the Gulf Coast for many years and is known around the state for his work with Biloxi Housing Authority and for his philanthropy.

Biloxi Housing Authority has also dedicated its Cadet Point Senior Village Complex.  This exciting project will provide 76 senior residents with neat, safe, comfortable and affordable homes.  Architects designed the village to look like the old hotels of Biloxi’s early years.  Robinson’s intent is for this complex to become the flagship development of Biloxi’s Hope VI Project and the social center of Point Cadet.

Before the tour of the village, the Housing Authority announced that it would name the senior village in honor of Robinson because of all the chairman has done to rebuild Hope VI after Katrina.  Robinson was overwhelmed with the well-deserved honor stating, “I’m only doing what my people have always done here in Biloxi.  And that is to make it a better place.”

Robinson lived and worked in Cherokee from 1969-1995 as director of the Oconaluftee Job Corps.  In 1986, he was adopted as an honorary member of the Eastern Band of Cherokee Indians and given the name of di-go-tsv-gi a-li-nv-tlv-I which means “Builder of Brotherhood”.

He has served the Tribe as a volunteer for over 40 years, assisting almost every Tribal and school program, and he was instrumental in the Tribe’s land exchange with the National Park Service for the new Cherokee Central Schools.

He was named Citizen of the Year in the state of North Carolina in 1989, won the Department of Interior Superior Service Award in 1991 and has won numerous other awards throughout the years.  Robinson and his wife, Lois, maintain a part-time residence in Cherokee.  They have four sons, Rodric, Keith, Derek and Marcus.