FRANKLIN – The Qualla Boundary Special Olympics team participated in the Spring Games at Macon Middle School in Franklin on Friday, April 20.  A total of 23 athletes and 30 volunteers made the trip from Cherokee along with family, friends and supporters. 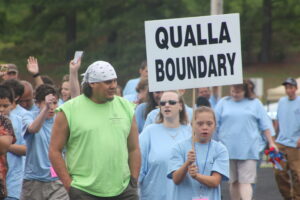 “We are excited to have our biggest group of athletes here today representing Qualla Boundary,” said Lana Lambert, Qualla Boundary Special Olympics coordinator.  “They’ve been working hard on their events and are going to do a great job and make everybody proud.”

Lambert said the Qualla Boundary team was aided at the event by volunteers from the Wellspring Academy of the Carolinas in Brevard.

“I appreciate you so much and what you do and what you stand for,” said Macon County Commissioner Kevin Corbin who served as emcee for the event.  “I am privileged to have been asked to be a part of this today.” 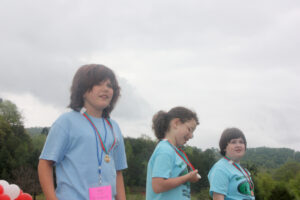 Jennifer Garrett, who served as coordinator for the event, said, “I’m glad you all could make it and I’m glad the weather held out for us.”  She said the games will be held at the Macon County site for the next two years.

Macon County Commissioner Ronnie Beale led the group in an opening prayer.  Following his prayer, he praised the volunteers at Friday’s event.  “Remember this, professionals built the Titanic.  Volunteers built the Ark.” 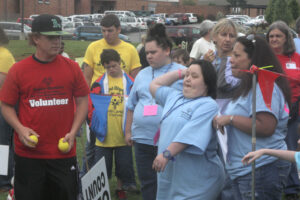 Boy Scout Troop 235 presented the colors and led the crowd in the Pledge of Allegiance.  They were followed by a group called Singing Angels who led the National Anthem.

Leanne Webb, of the Macon County program, led the athletes in the Special Olympics Oath, “Let me win.  But, if I cannot win, let me be brave in the attempt.”

The Special Olympics torch was carried into the stadium by members of Macon County law enforcement.  Macon County Sheriff Robbie Holland carried the torch on its last leg and helped light the flame.

For more photos of this event, visit the One Feather photo gallery at: