A recent report by the Kituwah Preservation and Education Program stated that there were 318 fluent Cherokee language speakers in the Eastern Band of Cherokee Indians as of March 2012.  The New Kituwah Academy is doing its best to increase that number by creating fluent speakers in its daily immersion school classrooms. 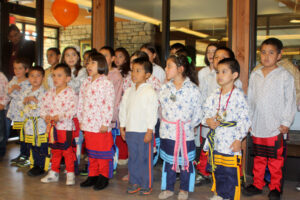 The school marked its eight year anniversary on Thursday, April 19 with a small celebration for students, faculty, parents and community members.

“It’s a true blessing, for me personally, to work here with the children,” said Martha Ledford, a fluent speaker and faculty member who related it makes her day to hear the children, especially the young toddlers, beginning to speak the language.

“It makes this whole journey just a blessing,” she said.  “It’s just remarkable, and I want to thank the Council and the Chiefs and anybody who supports this program and believes in us and believes in our language and the revitalization of it.”

Gil Jackson, Kituwah Academy administrator, related, “I couldn’t be more impressed by these kids.  There’s nothing they can’t do or learn.” 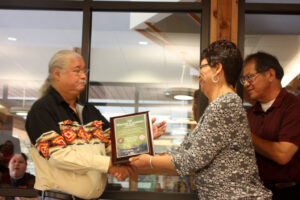 Cynthia Grant (center) presents a plaque to Pat Calhoun honoring the contribution his father, Walker Calhoun, made to the Cherokee culture as Gil Jackson looks on.

During the anniversary celebration, family members of the late Walker Calhoun, a fluent speaker from the Big Cove community who passed away several weeks ago, were presented with a plaque recognizing his contribution to the Cherokee culture.

Big Cove Rep. Bo Taylor was a student of and a friend to Calhoun.  “Until his dying day, he was humble.  He never knew the impact he had on this community and to the world.  One thing I can always say about Walker Calhoun is that he gave of himself.”

Rep. Taylor said both of his grandfathers died when he was little so he didn’t have a grandfather figure growing up.  “I showed up at his (Calhoun) doorstep one day and he never turned me away.  He never said, ‘go away’, and he was willing to teach me.  He would teach anyone that would come.”

“I am nobody without Walker Calhoun.”

To view more photos from this event, visit the One Feather photo galleries at: