Tribal members vote a resounding “no” on alcohol

EBCI tribal members went to the polls on Thursday, April 12 and voted a resounding “no” on three referendum questions dealing with the sale of alcoholic beverages on trust lands of the Tribe. 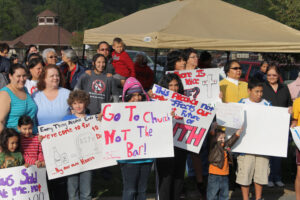 A group rallies against alcohol two days before the referendum vote last week. All three measures to sell alcohol on the reservation were defeated. (ELVIA WALKINGSTICK/One Feather)

“Obviously, we’re all glad it’s over with,” said Principal Chief Michell Hicks.  “There was a lot of anticipation and a lot of opinions on the issue.  But, what I am most thankful for is that we have a formal process now.”

“Whether you agree with it or not, we have a referendum process and obviously it works,” he continued.  “The people have spoken now.  We know what our opportunities are and what our limitations are and we’ll move forward based on what we now understand.  Obviously, there are positives and negatives to the issue and there always will be.  There will be future generations that have to deal with it just like this one did.  Again, I’m glad it’s over with.  The message is very clear, and I just want to thank our public voters for getting out and letting us know how they feel.”

All results are unofficial and will remain so until certified by Tribal Council during their May session.

“Obviously, based on the results of the vote, the residents of Cherokee do not wish to have alcohol available here and have felt this way for a long time,” said Matthew Pegg, Cherokee Chamber of Commerce executive director.  “With that, we need to look at ways to develop our destination to attract and keep tourism dollars here in Cherokee.”

“Not having alcohol in Cherokee, outside of Harrah’s, will not stop us from working hard to attract tourists to visit.  Along with the Cherokee Chamber of Commerce, there are many organizations including the EBCI Travel and Tourism Department, Fish and Wildlife Management Team, Greater Cherokee Tourism Council, Sequoyah National Golf Course, and many others that still got up this morning and went to work with intent on bringing visitors to Cherokee.”

Bob Blankenship, former TABCC chairperson, related, “The people have had the chance to express their view and that is what we all must abide by.”

Debbie Sexton, a member of the Cherokee Church of Christ, related, “There are good arguments for both sides of the issue of how alcohol could help boost the economy, but what I do feel good about is that the people have stood up to voice their stand that they need to stay true to their elder’s beliefs that alcohol will ultimately only cause unhappiness.”