Unit is first of its kind in Indian Country

Tsali Care Center hosted a historic event on Monday, April 16.  The Center held a ribbon-cutting and official opening of its new Memory Care Unit, the first facility of its kind in all of Indian Country. 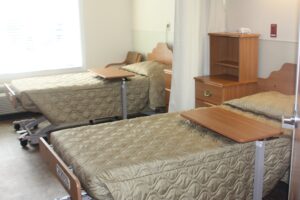 The 12-bed facility will be for those patients suffering from Alzheimer’s and any kind of dementia.  Funding for the renovation work to the facility was provided by a $650,000 HUD community development grant and $125,000 from the Eastern Band of Cherokee Indians.

“We are very excited,” said Vickie Bradley, EBCI deputy health officer who thanked tribal leadership for their support of the project.  “All of you got behind it and pushed it, and it’s come to fruition.  We have 12 beds and we are full as we open.”

“What a wonderful day for our community that we can keep our elders here, and we don’t have to send them out anymore,” added Bradley who gave accolades to the Tsali Care Center staff.  “All of the staff have just done a tremendous job in preparing, training, hiring and getting ready for these patients.”

Principal Chief Michell Hicks said the statistics available on Alzheimer’s are alarming.  “It’s something that we all need to be aware of within our families, and I’m glad to see that, through all the turmoil that us, as tribal leaders, sometimes have to deal with there’s always a blossom out there, and that’s what you work for.  I’m just glad to know what we’ve accomplished.  Thank you to all the staff that have been involved and thank you Tribal Council for your leadership.”

Principal Chief Michell Hicks and Yellowhill Rep. David Wolfe cut the ribbon to officially open the Memory Care Unit on Monday as members of Tribal Council and EBCI Health and Medical Division staff look on. The large scissors were donated by Chrissy Arch of Plan Ahead Events.

“We don’t always get it right,” Chief Hicks said, “but, on days like today, we get it right.”

Yellowhill Rep. David Wolfe, who serves as the chairman of the Health Board, commented, “This is an initiative that we’ve spent a great deal of time on to come up with funding to serve our elders.  We’d like to keep them all here, and that’s what we strive to do.”

Big Cove Rep. Perry Shell related, “This is a special time for me.  I know we ask a lot of Tsali Care, and what we can give in the future to make sure this is successful, we are willing to give.  I’m so glad this is here for our people.  This disease affects so many people and is so devastating, not only to the person, but to the entire family.”

David Hunt, Tsali Care Center manager, said, “I would like to thank Chief Hicks, Planning Board, Health Board and Tribal Council as a whole.  The support that you give this facility, the elders and the staff is phenomenal.  Without a doubt, caring for your elders is a high priority.  You show that through your work, your actions, and we appreciate you.”

“It’s the sixth leading cause of death,” she said.  “It moved in one year from the seventh to the sixth.  It is the only disease on the list that cannot be cured, prevented or stopped.  Since 2000, it has rose 66 percent among our population while other types of diseases like cancer and different deadly diseases dropped.”

Dotson said she is very excited about the opening of the new facility.  “People with Alzheimer’s disease need these specific types units.  A lot of times it’s great for them to be together and interact.  So, I’m just really excited about this.”