Registered voters of the Eastern Band of Cherokee Indians head to the polls tomorrow to decide on four referendum questions related to the sale of alcohol on Cherokee trust lands.  The questions relate to the sale of alcohol in restaurants and grocery stores, to permit a Tribal ABC store to sell to the public and to allow each township the local option to call for a special referendum in that township to vote out alcohol if they so choose. 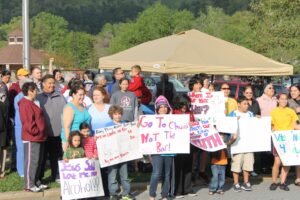 A group of around 250 people gathered near the Tribal Council House on Tuesday, April 10 to protest the alcohol referendum. (ELVIA WALKINGSTICK/One Feather)

The referendum is on despite the efforts of some questioning its legality.

Peggy Hill-Kerbow, on behalf of herself and 14 other EBCI tribal members, filed a Complaint and Request for Injunctive Relief in Tribal Court on Tuesday, April 10.  The following were named as defendants in the document: Eastern Band of Cherokee Indians, the EBCI Tribal Council Representatives, EBCI Election Board, Tribal Alcoholic Beverage Control Commission (TABCC) and Principal Chief Michell Hicks.

The complaint alleges that “defendants chose to ignore Tribal Law Cherokee Code Chapter 161-9 Referendum/Initiatives and passed the Resolution to hold a referendum vote on April 12, 2012 the same of alcoholic beverages on Tribal Trust Lands.”

It also alleges that the TABCC has acted “over and beyond their realm of authority”.
The plaintiffs were asking for a complete halt to the referendum as well as the Court to find “the defendants have engaged in conduct that violates Tribal Law”.

As of noon on Wednesday, April 11, no word had been released from the Tribal Court on the injunction.

An informal group of protestors gathered in front of the Council House on Monday and Tuesday and held a rally march on Tuesday night.

“We don’t have laws ready to protect us and serve us,” said Missy Crowe on Monday.  “We can’t even take care of the tribal members that abuse alcohol now.”

Last week, Crowe was part of a group of over 40 EBCI tribal members who hand-delivered a letter to Principal Chief Michell Hicks asking for a special session of Tribal Council to discuss several legal issues they saw with the referendum.

They questioned several points of Tribal law pertaining to referendums including Sec. 161-9(10) which states, “An issue that has been brought up before the eligible voters and voted upon by referendum/initiative may not be voted upon again until a period of five years have passed.”

Amy Walker, an elder from the Yellowhill Community, said on Monday, “God’s Will will be done.  I believe God is truth and love.”

She said it is important for all to remember that decisions made today will affect generations.  “I’d just like for our leaders to listen to the people.  Do what is right and just.  The laws that are being made will trickle down for several generations.”

The request for a Special Council Session was denied.

Tarnawsky’s opinion reads, “Yes, the questions presented to the Cherokee voters in the April 12, 2012 referendum are legal and not barred by Sec. 161-9(c)(10), which prohibits an issue presented to voters through a referendum/initiative from being voted on again until the passage of five (5) years.”

She goes on to say that it is legal as the question presented in 2009 was different than the ones being presented this time.  “Black’s Law Dictionary defines ‘issue’ as a single, certain material point or a point in dispute (Black’s Law Dictionary, 9th ed. 2009).  While the referendum question presented in 2009 deals with the broad subject of alcohol, the specific question or point about alcohol is entirely different from the questions being presented in the April 12, 2012 referendum.”

Tarnawsky concludes her opinion by writing, “Interpreting Sec. 161-9(c)(10) to mean that the alcohol question voted on at the June 4, 2009 referendum prohibits the four (4) referendum questions being presented to voters at the April 12, 2012 referendum is inconsistent with Tribal Council’s intent and with the well established principles of statutory construction.  While the questions presented at both referendums do deal with the broad subject of alcohol, the questions do not deal with the same, or even similar, issues related to alcohol.”

The polls are scheduled to be open from 6am – 6pm.