The Cherokee Flight Boys Basketball team traveled to Charlotte for the AAU Super Regionals on March 23-25.  There were 22 teams in the 8th grade division from all over the East Coast, and the Flight won the championship and a bid to the AAU Nationals Tournament at Disney’s Wide World of Sports in Orlando in July. 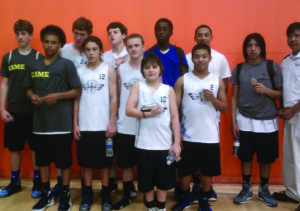 In the Super Regionals, the first pool play game was against the South Charlotte Heat, and the Flight finished with an impressive win of 106-34.

The next game was against the Charleston Cavaliers from West Virginia, and the Flight won 79-77 in overtime.  This was a rematch game for Flight.  The Cavaliers beat Flight at Nationals last year for their only loss.

The final pool play game was against the Brevard Elite 2016 from Florida.  They jumped up on the Flight and at the half, Flight was down by 11.  The boys worked hard and came out with an 85-75 win.

The Flight then started the bracket play against Charlotte Thunder.  Flight started out with a good lead and maintained it throughout the game winning 76-58.  With that win, Flight was in the championship game.

For the championship, Cherokee Flight played MVP Basketball from Raleigh.  Once again, Flight started out quick on this team and got a good lead at the start of the game and went on to win the championship 83-64.

Next on their road to the Nationals is AAU State Pool Play in Charlotte on  April 13-15 and AAU State Championship in Raleigh on April 27-29.

“We want to thank all of our parents and fans,” said Flight coach Blaine Wolfe.  “We also want to thank everyone that continues to support us in our fundraising efforts.  Your support is truly appreciated.”