Brave men “Walk a Mile in Her Shoes”

Men wearing high heel shoes paraded through downtown Cherokee on Thursday, April 5.  No, it wasn’t a drag show, and none of them lost a bet.  The brave men donned the shoes, as part of a “Walk a Mile in Her Shoes” event which drew over 100 people, to help bring awareness to the problem of violence against women. 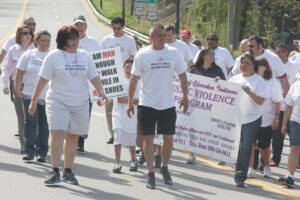 Donning high heels and joined by over 100 people, Principal Chief Michell Hicks leads out the "Walk a Mile in Her Shoes" walk on Thursday, April 5. (SCOTT MCKIE B.P./One Feather photos)

“Thank you for manning up and walking with us,” said Painttown Rep. Terri Henry, a long-time advocate against domestic violence.  She spoke to the crowd about the importance of awareness and education on the problem as well as the need to reauthorize the Violence Against Women Act (VAWA).

“From its initial passed in 1994 to now, the VAWA has been the vehicle to bring awareness of the epidemic rates of violence committed against Native women to the U.S. Congress and it has been the vehicle for tribes getting the federal legal reforms and resources needed to address domestic and sexual violence,” said Rep. Henry.  “Native women face more than twice the rates of violence than women of other races in the United States.  34 percent of Native women will be raped in their lifetime and 39 percent will suffer domestic or intimate partner violence.”

“These are the shoes we will walk in today.  The 2012 Reauthorization of the Violence Against Women Act contains amendments to federal law that would restore limited jurisdiction to Tribes over all persons committing domestic and sexual violence.  It is time for tribes to have local control over criminal activity in our tribal areas.  The Eastern Band stands ready for this jurisdictional restoration.”

Gil Jackson was one the brave men at the walk.

Tom Hill, of Analenisgi, said it is important for men to take responsibility for the problem.  “We are responsible for this problem and we are the ones that have to take care of it.”

He said many ask the question of why does an abused woman not leave or why do some women continue to return to their abusers.  “How come we don’t ask, ‘why does he keep hitting her?’”

Principal Chief Michell Hicks donned high heels and led the walk.  “I do applaud the staff (EBCI Domestic Violence) for putting this event together.  We have got to be more supportive and more understanding on this issue.”

View 54 photos from this event at: https://www.theonefeather.com/photo-galleries-2/