Annette Saunooke Clapsaddle, an EBCI tribal member, has been awarded the 2012 Morning Star Award for Creative Fiction from the Native American Literature Symposium and the Charles Redd Center for Western Studies. The award was announced at the symposium in Isleta Pueblo, New Mexico. 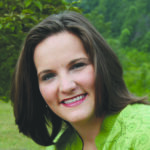 “I am honored to receive this award from a group of native writers and scholars that I personally admire,” she said.

Saunooke Clapsaddle has produced Cherokee Elders:  Our Greatest Generation and a series of children’s books including:  The Elder Tree, True Blue, and What Wonders.  Her recent publications include:  “It All Comes Out in the Wash” from Appalachian Heritage Quarterly,  “Camouflage” from Night is Gone, Day Is Still Coming and a contribution to Naked Came the Leaf Peeper.

She grew up in Cherokee and resides there with her husband, Evan, and son, Ross.  She holds degrees in American Studies from Yale University and the College of William and Mary.  Annette teaches English and Cherokee Studies and coaches basketball at Swain High School.
– Lynne Harlan, EBCI public relations