Are you man enough to “Walk a Mile in Her Shoes”?

April is National Sexual Assault Awareness Month. The EBCI Domestic Violence Program will be hosting an awareness event on April 5 at 10:30am called Walk a Mile in Her Shoes to raise awareness and support for sexual assault victims. 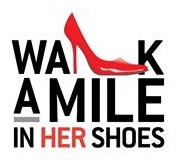 The event will focus on the men in the community. Male participants will literally walk a mile in women’s high heel shoes through downtown Cherokee. Cherokee Police Department will assist with ensuring safety and that no traffic interferes with the walk. Female participants will be allowed to walk along their male counterparts, or watch and root on, and take pictures of the men MAN ENOUGH to walk the mile.

The event focuses on the men to show that sexualized violence is not just a women’s issue. It affects men who care about them, their families, their friends, their coworkers, and their communities. Some of the statistics: Every two minutes someone is sexually assaulted in America, One in Six women in America are victims of sexual assault, but more than one in three Native American women will be raped in her lifetime. That means someone you know has been or may become a victim of sexual assault. It may be your mother, your sister, your friend, your girlfriend, your wife, your coworker or your daughter. Being MAN ENOUGH to walk the mile shows your support, and compassion for victims, and that you will not tolerate sexual violence in your community.

To sign up, please contact the EBCI Domestic Violence program at 828-554-6830, and provide your name, t-shirt size, and your shoe size by March 1. Yes, the high heels are being provided. These heels are designed to fit men, so actual shoe size is needed.
The walk will start at the traffic light near the Bear Zoo downtown; walkers will walk through downtown Cherokee, over the bridge and take a right at the traffic light at the KFC. Walkers will finish at the fair ground, where they will pick up their t-shirts and other memorabilia of the event.