Tribal Programs and members stepped up and participated with enthusiasm on Thursday, Nov. 17, to raise awareness for the March of Dimes “Purple for Preemies” Day, and in special support of the Tye Blanton Foundation.

According to information provided by the March of Dimes, babies born prematurely may have increased risks and complications, and may sometimes result in death.  Since its inception by Franklin Roosevelt, the March of Dimes has made great strides in assisting with medical research in the prevention of premature births.  It also provides information, encouragement, and different resources for families dealing with this issue.

To show Tribal support, many employees wore purple, took pictures, and sent stories in support of World Prematurity Day.  The pictures were featured on the March of Dimes-WNC  facebook page.  Here are just a few quotes from some of our local families of premature babies:

“My son was born at 31 weeks on April 22, 2010 weighing 4lbs and 8 oz.  Otter Weston McMillan is now 19 months old & kissing girls…I would fuss, but there was a point in time we didn’t know if we would ever see this day.”
– Helen Martin
mother of Otter “Tsi Ya” Weston McMillan

“Our preemie was born at 32 weeks, and spent two weeks in the NICU at Mission.  He turned four in September and is still small, but huge in spirit.”
– Jason Smith
proud father of Jonah Smith

“Joi was born in Asheville and weighed 3 lbs and 5 oz.  She was eight weeks early, and remained in NICU at Memorial Mission for five weeks.  Joi continued to be monitored by the NICU until she was five years old.  Each year the NICU conducted a celebration and monitored the progress of the preemie babies”
– Barbara Owle
grandmother of Joi Owle 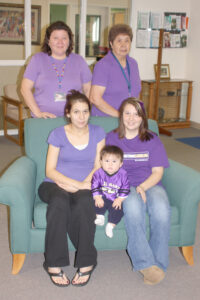 “The Tye Blanton Foundation is a blessing.  It helps parents at Memorial Mission Hospital while their children are in the NICU.  We supply gas cards, shampoo, soap, just something to make their lives easier while they are there, because we know firsthand what they’re going through.  For a grandparent, seeing my grandson hooked up to all these tubes, even holding Tye was a big ordeal because we had to make sure the tubes were situated and taped to the chairs so they wouldn’t be shut off.  Watching Tye go through what he did, that was the hardest”
–  Jeanell Youngbird
grandmother of Tye Blanton

“They were born at 34 weeks at Mission Hospital in Asheville.  They stayed there for two and a half weeks.  The NICU staff were amazing, and we are forever grateful for their services.  Marlee was 4.3 pounds, and Maven was 4.5 pounds.  They are six weeks old now and doing amazing.  My wife, Kadie, and I also have a 3-year old daughter named Bailey.  We are two shy of a basketball team now!”
– Josh Parker
father of six-week old twins Marlee and Maven 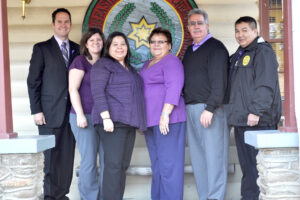 Brooke Brown is now 28 years old, and to see her it’s hard to believe she was born almost three months premature.  She is the daughter of Cherokee County – Snowbird Rep. Diamond Brown Jr. and Sandy Brown of the Snowbird Community.
Brooke was born Aug. 18, 1983, but she was not due until Nov. 22.   She was born at the Cherokee Hospital, with her parents just making it from Snowbird in time for her delivery.  Nothing could be done at the time to stop Sandy’s labor, and Brooke arrived at 3:20 a.m.  The staff and family feared for her safety, and the doctor on call made the decision to fight for her life.  Using a small pump, staff and parents had to manually pump oxygen into her tiny lungs.  When one person’s hand tired, another individual would take on the task of helping her breathe in this manner.  Brooke was stabilized and then sent on to Asheville.

Her father, Diamond, recalls “Her head was the size of a walnut, and her limbs were so tiny.  I thank the Creator she was all there.”

Brooke was just 13 inches long, and she weighed 1 lb and 11 oz.  She then lost down to 1 lb 8 oz before she started gaining.  Once in Asheville, she would forget to breathe on her own, and she received special treatment for this health issue.  She stayed in the hospital in Asheville for two and a half months.

Diamond’s advice to parents, “The more attention and love you can give a preemie, the better off the baby will do.”

Michaela Blanton, founder of the Tye Blanton Foundation, was thrilled with the support received from Cherokee.  “I just can’t get over what an incredible showing Cherokee had for World Prematurity Day!  People for Preemies is a way to get everyone involved in raising awareness of prematurity while having fun with it.  Seeing then and now pictures pouring in of children who have survived prematurity especially touched my heart.  Not every baby is as lucky, and that is why organizations like the March of Dimes and the Tye Blanton Foundation exist.  I would personally like to thank all of Cherokee who made purple their passion on Thursday, Nov. 17.  Nothing would have been possible without Jeanell Youngbird and Rosie McCoy.”

Aggie Alexander, Director of March of Dimes commented, “The March of Dimes is grateful to have the support of so many people in Cherokee.  The compassion and interest they have shown, not just in the past few days but ongoing, is a testament to their giving and caring spirit and to their love for the babies we are trying so desperately to save.  We are honored to call them our friends.”

Perhaps Dan McCoy, former Tribal Council chairman, summed it up best, saying, “We support our people here in good times and bad, and Tye was one of ours too.  By just wearing purple, if that helps out, helps someone to make a donation to the March of Dimes or Tye’s Foundation, then we need to do it.”

Note: The photos are from various sources that were sent to Mrs. McCoy.