There are approximately 1.25 million white-tailed deer in North Carolina according to the N.C. Wildlife Resources Commission.  But, western North Carolina has the lowest populations of the animal in the state reporting less than 15 per square mile in most western counties including Swain and Jackson. 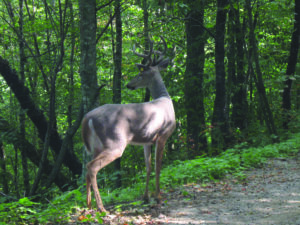 The photo above shows one of the 24 bucks released by the EBCI Fisheries and Wildlife Program as part of a new white-tailed deer project. (Photo courtesy of Robert Blankenship)

A project over four years in the making has come to fruition and aims to change those numbers.  The EBCI Fisheries and Wildlife Management Program has implemented the white-tailed deer research pilot project and has released 58 deer on tribal reserve lands.

The deer were released between May 14 and Nov. 1 by program staff.  A total of 34 does and 24 bucks were released, all with numbered ear tags.

Blankenship related, “To date and to the best of our knowledge, six deer have deceased; whether killed by cars, predators (coyotes, wild dogs and black bear), poachers or natural causes.”

He cautions the public to be extra careful of deer and wildlife sightings this fall and winter.  “In autumn, deer are on the move due to a series of both natural and human causes.  Increased deer sightings may occur for a number of reasons, such as the following: mating season, increased human population and rural development and time changes.”

Blankenship related that the program would like to offer motorists and others tips to help avoid potential collisions and encounters including:

– Unpredictable: Always remember deer are wildlife and therefore, can be unpredictable.  A deer calmly standing on the side of the road may bolt into or across the road rather than away from it when startled by a vehicle.

– One deer usually means more:  Take caution and slow down when a deer crosses.  Deer generally travel in groups, so if one crosses, be prepared that others may follow.

– Time of Day:  As deer are most active at dawn and dusk, they typically are seen roadside during the early morning and late evening – the same times most people are commuting to and from work.

– Time of Year:  While deer-car collisions can occur any time of year, the fall breeding season is a peak time for such accidents.  Road shoulders generally provide green food both during extremely dry times of the year and following a long, hard winter.

– Minimize Damage:  If it is too late to avoid a collision, drivers are advised to slow down as much as possible to minimize damage – resist the urge to swerve to avoid the deer.

Blankenship also wants to remind the public of Cherokee Code Chapter 113 Hunting and Fishing Sec. 113.5 which states, “It shall be unlawful to hunt, trap, kill or take deer.”

He did relate, “The Fisheries and Wildlife Management Program’s intent is to offer managed white-tail deer hunts to tribal enrolled members once the research portion of this project is successful.  We are estimating this will take approximately three to four years.  One of the main goals of the project is to maintain and sustain a white-tailed deer population that will benefit our tribal members and future generations.”