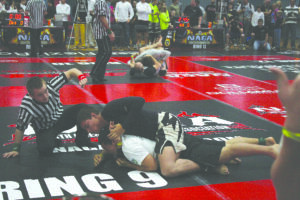 “I was nervous going into my first match, but as soon as the referee said go, everything else went away and it was just everything I have been taught by my instructors,” French said.  “I could not hear the crowd yelling and cheering, it was my opponent and me.  After winning the first match, I was ready for the rest of the day.”

He took three first place championships on Saturday including two in the No-Gi Division and one in the Gi Division.  French was entered in the Intermediate Teen Division for both No-Gi and Gi and was asked to step up to the Expert No-Gi in which he won the first place belt.

“I was so happy driving all the way from Cherokee, NC to compete in Gallatin, Tenn. and then to bring home three first places, one including the Championship Belt for No-Gi,” he said.  “I have to thank my grandfather Lloyd Arneach, Sr. for making the trip possible and my cousin Bree Tiger Riggan and family as well for coming and and giving me support during my matches.”

French trains in mixed martial arts during the week at Birdtown Gym with Clyde Dull and on Sundays at the Basulto Academy in Waynesville.

French poses with the swords and belt he won at Saturday's grappling tournament.

Dull commented, “Landon works hard and listens to instruction and fights smart.  He has gone past me on the ground.  He has great sportsmanship.  I am proud of what he has done and I hope he takes it further than I ever did.”

Armando Basulto is French’s jui-jitsu instructor in Waynesville.  “It was no surprise to see Landon being more technically proficient than the other young men in his division.  His commitment will always make him more dominant.”