“It is our duty and honor to honor those men and women,” Commander Lew Harding, Steve Youngdeer American Legion Post 143, told an assembly of students on the importance of Veteran’s Day.

“We thank you so much for your years of service, for laying your life on the line and dedicating yourself to service,” Cherokee Central Schools superintendent Jimmy Arispe told the veterans present at Thursday’s event.  “I really appreciate all of your service veterans and thank you for being here and letting us honor you.”

Warren Dupree, a veteran of the Vietnam War, Desert Shield and Desert Storm, is the Post 143 service officer and served as the emcee for Thursday’s event.  “These are the true heroes of this great nation.  Freedom is not free.  We own an eternal debt of gratitude to our veterans and Veteran’s Day is when that debt becomes due.” 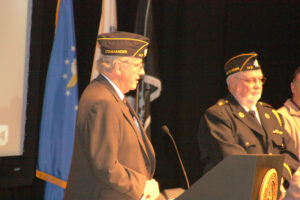 He told the students a brief history of how Veteran’s Day came to be and read the poem “What is a Veteran?” written by Father Denis Edward O’Brien, United States Marine Corps.

The service of two Cherokee soldiers was highlighted during the event including Pfc. Reuben Taylor and Lt. Col. (Ret.) Kina B. Swayney.

Pfc. Taylor, a WWII veteran, served in the U.S. Army 82nd Airborne Division at the D-Day Invasion and the Battle of the Bulge.  For his service, he received numerous medals and commendations including the Bronze Star and the Purple Heart.

Lt. Col. Swayney, a 24-year U.S. Army veteran who recently retired, is the first Eastern Cherokee woman to achieve the rank of Lieutenant Colonel.  She served overseas including several positions in the Middle East and earned many medals including the Army Commendation Medal, the Defense Meritorious Service Medal and the Global War on Terrorism Service Medal.

A special slide show presentation was shown during the event honoring the service of American Indian soldiers of tribes across the country.  Prior to this, the song of each branch of service was played and veterans were asked to stand and be recognized as their song played.

The Cherokee JROTC Color Guard closed the program by retiring the colors.

To view more images from this event, visit the One Feather photos galleries at: