Veteran’s Day is not just another day

On Friday, Nov. 11, our celebration at the Cherokee Indian Fairgrounds exhibit hall at 11am will honor men and women in and out of uniform who have served us all.  Their commitment to, and sacrifices for, our country sometimes has been at great personal loss.

We owe them an enormous debt of gratitude.  They exhibited great strength and courage, sometimes in the face of unsurmoutable odds.  Our Cherokee Medal of Honor recipient, Charles George from Birdtown, was one such soldier.

One o f the unique things about war is the way it thrusts ultimate responsibility on the very young.

Former Principal Chief Robert S. Youngdeer was barely out of his teens when he and fellow Marines were thrust into one of the critical battles in the Pacific during World War II.  He is a beloved brother and a genuine America hero.

It is our hope that on this Veteran’s Day, and all days, our community will remember how very close we came to losing all of our freedoms in World War II and remember those who gave so much.

This special Veteran’s Day ceremony is as much for us as it is for them.  These old warriors have served selflessly.  But, it seems that a disconnect has occurred between past generations that asked only to serve and those now who ask only to be served.

Attitudes of entitlement have replaced diligence, sacrifice and hard work.

What we have been blessed with by our veterans is worth the struggle to keep.  Our country is seriously challenged both internally and externally.  Just watch the evening news. 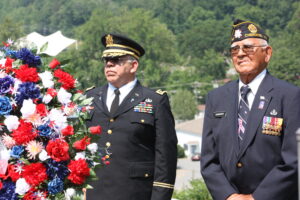 Maj. Bill Underwood prepares to lay a wreath at the Yellowhill Veterans Memorial Cemetery along with decorated veteran and former Principal Chief Robert S. Youngdeer during the Memorial Day Ceremony in May. (SCOTT MCKIE B.P./One Feather)

Our sense of moral leadership is compromised by the “get what you can, from whom you can, when you can” attitudes of predatory greed, from Wall Street to Main Street.  A lot of Americans don’t know enough or care enough about political or military matters to become educated or involved.

History tells us plainly that apathy is dangerous for a superpower.  It usually leads to catastrophic consequences.  Pay attention young people to what a tiny minority has done for a vast majority, at great sacrifice.

Honor your veterans and let them help serve to rebuild a generational bridge of understanding and respect and love of country.  You, and your children, will be glad you did.

There will be a meal served after our Veteran’s Day Ceremony.  If we can’t entice you with that, come and watch a deeply moving video, “A Family Affair, A Prayer For Our Troops”.  It will be worth the effort, guaranteed.  See you there.

Harding is the Commander of the Steve Youngdeer American Legion Post 143.