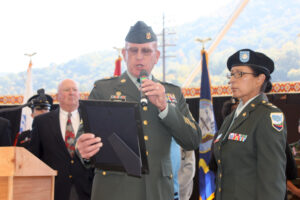 “I learned to become a soldier during basic training at Fort Knox, KY in 1984,” she said.  “I learned this while running the endless, rolling hills at Fort Knox, Kentucky.  The two most demanding hills, Agony and Misery, were appropriately named.  There, I learned to n ever quit, hold out until we reached the hill, recover on the downhill, and then…get ready to take the next hill – much like life.  That’s where I learned the Soldier’s Creed ‘never quit and never accept defeat’.”

She received a bachelor’s degree in Political Science from Western Carolina University and a master’s degree in Human Resources Management and Organizational Development from Webster University.

With the rank of Lieutenant Colonel, she achieved the highest rank of any EBCI woman in history.  She takes the role of officer very seriously and related the difference between the rank and the responsibility.

“The Officer title came when I was commissioned into the Army as a 2nd Lieutenant – the first college graduate and the first officer in our family,” she said.  “From that point on, I took an oath to uphold the Constitution of the United States.  That day marked my designation as a commissioned officer, but the title of leader did not come with a designation or oath.  That title was earned through trust and confidence of the soldiers I was entrusted to lead as well as the officers and leaders over me.”

She served overseas including several positions in the Middle East including:  training and exercise officer in Qatar and Egypt, training mission to strengthen partnership with the Kazakhstani Army, and an assignment to serve on an Iraqi Assessment Team – the only female on the team of 50 – where she flew in and out of training sites daily evaluating the Iraqi Army.

“I’ve experienced major change in the global organization as the Army drew down in the 1980s and 1990s from a big Cold War Army to the light Expeditionary Force we are now,” Lt. Col. Swayney commented.  “Much of this change took place while we were also fighting the Global War on Terrorism in two different areas of the world.”

She credits her husband of 33 years Doug and their family with much of her success.  “When soldiers take the oath, we make a commitment to the military.  Even though our families don’t take the same oath, they make many of the same sacrifices we make by moving every two to three years, changing jobs and schools, giving up friends, family and their own careers.  They commit to a life of service and are just as committed as we are.”