Robbinsville edged Cherokee 17-14 on a cold, rainy night to end the Braves (3-8) season.  But, the real story on Friday, Oct. 28 was the record-breaking seasons by QB Raymius Smith and his favorite target Greg Tisho. 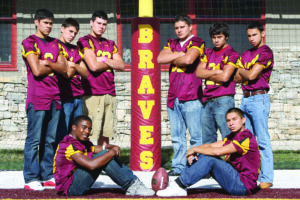 Tisho broke the school record for receiving yards in a season with 1,040.  He caught 51 passes and scored 11 TDs.   Tisho had the most yards in the regular season of any receiver in western North Carolina.

He also led the team in tackles with 35 and 103 assists followed by Forrest Stamper with 28 tackles and 64 assists and Tavi Rivera with 23 tackles and 68 assists.

“I’m really proud of the coaches and players,” said Ray Kinsland, the “Voice of the Braves”.  “Those boy s and the coaches desert a great appreciation for never quitting and never giving up.”

The leading rusher on the team was Caleb Queen with 507 yards on 86 carries.  He was followed by Corbin Wright with 421 yards on 71 carries.  Neither played an entire season with Queen playing nine games and Wright playing eight.

In Friday’s game, Robbinsville got on the board first as Zack Waldroup ran for a 7-yard score.  Josh Gibson added the extra point and the Black Knights led 7-0 at the 4:45 mark in the first quarter.

Several minutes later, Smith got Cherokee on the board as he took it into the end zone from one yard out.  Derrick Ledford added the extra point and the game was tied 7-7.

The second quarter was scoreless and the only scoring in the third quarter would be on a 24-yard field goal by Robbinsville’s Gibson which proved to be the difference in the game.

With a 10-7 lead, Robbinsville converted a fake field goal play halfway through the fourth quarter as Dakota Crisp passed to Greg Burchfield on a 13-yard score.  Gibson’s kick was good and the Black Knights led 17-7.

But, the Braves would not quit.  They’d make it close as Smith hit Tisho on a 19-yard touchdown pass with just over a minute left.  Ledford’s kick was good to make it 17-14 which is how it ended.