Cherokee (0-2) had more total offense (328yds to 232yds) than the Mitchell Mountaineers (2-0), but three lost fumbles (four total) and two interceptions proved costly for the Braves once again as they fell 38-2 on Friday, Aug. 26. 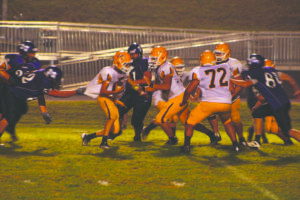 Braves QB Ray Smith (#5) takes off on a run as a Mitchell defender holds on during a game on Friday, Aug. 26. (DENISE WALKINGSTICK/One Feather contributor)

Justin Hughes had a big night for the Mountaineers carrying the ball 11 times for 100 yards and three touchdowns.  He averaged 9.1 yards a carry on the night.

With the exception of two interceptions, Braves QB Ray Smith had a wonderful night completing 14 of 18 passes for 187 yards (13.4avg).  Greg Tisho caught seven of those passes for 105 yards bringing his season totals to 12 catches for 165 yards.

The Mountaineers got out in front early with two first quarter touchdown runs by Hughes (4 yards and 70 yards).

Isaac Edwards kicked a 32 yard field goal midway through the second quarter and Ryan Sparks caught a 25 yard touchdown from Hughes to give Mitchell a 24-0 lead.

Cherokee got a safety on the Mountaineers with just over a minute left before the half to bring it to 24-2, but that was all the points Cherokee would put up on the night.

Michael Styles ran for a 10 yard touchdown in the third quarter and Hughes got his third touchdown of the night on a 31 yard run in the fourth quarter to round out the scoring for Mitchell.

Both teams were penalized a lot in the game with Cherokee receiving eight for 102 yards and Mitchell getting seven for 81 yards.

The Braves play host to the Towns County (Ga.) Indians (0-2) at Ray Kinsland Stadium on Friday, Sept. 2.  Towns County has gotten off to a slow start this season losing first to Hayesville 21-6 and last week to Union County 20-0.

Player of the Week

The Player of the Week award is chosen by the Cherokee coaching staff and sponsored by Granny’s Kitchen and Wendy’s.  For the Smoky Mountain game, the award went to Greg Tisho.  For this past week’s game against Mitchell, the award went to Tavi Rivera.

The first half was scoreless for both teams, and it wasn’t until 1:12 left in the third quarter before Cherokee got on the board as Kobe Toineeta ran for a 12 yard touchdown for the first score of the game.  Brandon Buchanan ran for the two-point conversion and the Braves led 8-0 going into the fourth quarter.

Five minutes into the quarter, Cherokee’s Jaylen Evans ran for a 3 yard score.  The two-point try failed and Cherokee led 14-0 with just over seven minutes left in the game.

The Braves would add one more score to seal the game as Channing Lossiah caught a 19 yard touchdown pass from Buchanan with 1:52 left.  Toineeta ran for the two-point conversion to make the final score 22-0 in favor of Cherokee.

The JV Braves travel to Thomas Jefferson on Thursday, Sept. 1 with a kickoff scheduled for 6pm.