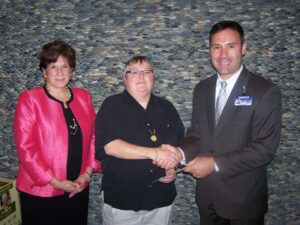 Darold Londo (right), general manager at Harrah's Cherokee Casino and Hotel, presents a check to Lisa Lefler (center), a professor of medical anthropology at Western Carolina University, and Linda Seestedt-Stanford, dean of the College of Health and Human Sciences, for the Culturally Based Native Health Program. (WCU photo)

Established in 2006, the Culturally Based Native Health Program, or CBNHP, provides health professionals with an opportunity to acquire knowledge about Cherokee culture and other Native American cultures that might help them in treating patients.

The program’s lecture series is designed to help inform the public of issues that affect the health and well-being of Native peoples and to be of interest to those who work in rural communities in Southern Appalachia with other underserved populations.

Since the series began in 2010, hundreds of participants have attended the lectures. Past speakers include Dr. Ann Bullock, chief clinical consultant for family medicine for the Indian Health Service with the EBCI, and Dr. Eduardo Duran, a psychologist working in Indian country and author of several books including “Healing the Soul Wound: Counseling with American Indians and Other Native Peoples.”

For more information about the CBNHP or the lecture series, contact Lisa Lefler, a professor of medical anthropology and director of WCU’s component of the program, at 828-227-2164 or llefler@wcu.edu.