Several EBCI tribal members will be competing within the next month in professional, amateur and nationally-ranked arenas for various forms of martial arts. 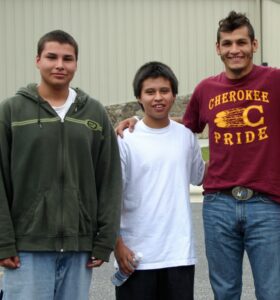 Beginning the fight season will be hometown favorite Dan “the Handler” Hornbuckle, a professional mixed martial arts fighter for Cherokee out of Mahomet, Illinois. His fight is scheduled for Saturday, Sept. 10 and will be televised on MTV Live from Atlantic City for Bellator 49. The Handler will be fighting Luis Santos. To keep up with Bellator and Dan see online at:

James Kanott will be in his second amateur fight on Saturday, Sept. 17 in the Warrior Challenge 13 at the York Holiday Inn & Conference Center in Lancaster, Penn.  He won his last fight by unanimous decision against Micah Palmatier.

This is a nationally-ranked event.  It will be Landon’s second time competing for NAGA and Jerico’s first. The guys have been training with Clyde Dull at the Birdtown Gym in Cherokee, The Palestra Gym in Sylva and with Gracie Jiu-Jitsu  Professor Armando Basulto in Waynesville. For more information on NAGA see online at: