SYLVA – Three lost fumbles and a slew of penalties cost the Braves in their season opener against the Smoky Mountain Mustangs on Friday, Aug. 19.  The mistakes combined with a 20-point third quarter by the Mustangs, gave Smoky Mountain a 26-14 win.

Greg Tisho caught two touchdown passes for the Braves’ two scores.  In all, he caught five passes for 60 yards which accounted for almost half of Cherokee’s total offense (137yds).

Usually a strong running team, the Braves only gained a total of 45 yards on 32 carries.  Logan Woodard was the lead rusher for Cherokee with 40 yards on 15 carries.  He also completed 5 of 9 passes for 92 yards.

But, a large part of that equation could have been due to a pre-game injury by Dorian Walkingstick – Cherokee’s leading rusher from 2010 and one of the top rushers in the entire state.  No word yet on the extent of his injury.

Cherokee got off to a slow start in this game fumbling the ball on the third play of the game.  Smoky Mountain’s Clay Buchanan recovered the ball, but it was short lived as they fumbled the ball right back to the Braves two plays later. 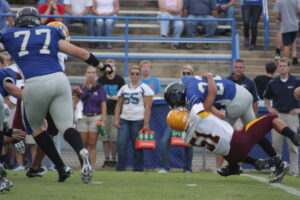 Tavi Rivera tackles Blake Smith (#22) in the backfield in the first half of Friday's game. Rivera recovered a fumble which help set up the Braves first score.

Tavi Rivera recovered the fumble and Cherokee set up shop at the Smoky Mountain 30 yard line.  Then, Ray Smith connected with Tisho for a 26-yard score.  Derrick Ledford’s kick was good and Cherokee led 7-0 with four minutes left in the first quarter.

A few minutes into the second quarter and the Mustangs would get on the board as Drew Londo hit Zachariah Carter on a 27-yard touchdown pass.  The kick failed and Cherokee took a 7-6 lead into the locker room.

Not sure what their coach told them at halftime, but the Mustangs came out running on all cylinders in the third quarter scoring 20 points.  Blake Smith got it going on a 54-yard touchdown run just 23 seconds in the half.  The two-point conversion failed and Smoky Mountain led 12-7. 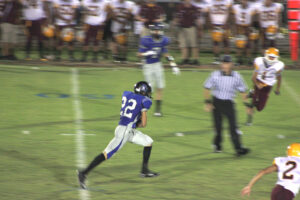 Smoky Mountain's Blake Smith (#22) takes off on a 54-yard touchdown run early in the third quarter.

Led than two minutes later, Smith was back in the end zone on a 7-yard run.  Again, the two-point try failed and Smoky Mountain extended its lead to 18-7.

Later in the quarter, Woodard gave the Braves life again as he intercepted a Londo pass at the Smoky Mountain 31-yard line and returned it to the 10.

Then, Smith connected with Tisho on a 10-yard score for his second touchdown catch of the game.  Ledford’s kick was good and Cherokee cut into the lead 18-14.

Just forty seconds later, and Smith put the finishing touches on the game on a 51-yard touchdown run, his third of the game.  Nick Gracheck hit Londo for the two-point and the Mustangs pulled away to 26-14 which is how the game would end.