Tribe recognized for supporting members of the Armed Forces

The Eastern Band of Cherokee Indians was recently recognized for their support of members of the Armed Forces.  The Tribe was nominated for the 2011 Secretary of Defense Employer Freedom Award by 1SGT Mark Kephart, HHC 105th Military Police Battalion, North Carolina National Guard.  Over 4,000 employers were nominated across the United States, and the Tribe was among the 130 semi-finalists selected. 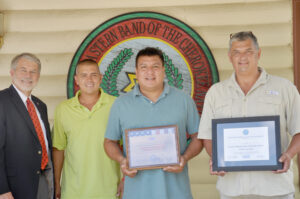 “They allowed me to keep my health insurance on myself and family.  The Principal Chief and Vice Chief  along with several Tribal Council Members and coworkers have called me on several occasions making sure my family was being taken care of” stated 1SGT Kephart.  “My work family is much like my National Guard family and have become very important  to me and my family.  I feel very blessed to have them support me as we defend the freedom we all love”.

Principal Chief Michell Hicks stated upon receiving the award, “The Eastern Band of Cherokee Indians is proud of our service men and women.  We are happy to support those men and women in any way possible and this award signals to us that we are on the right path.”

On a recent visit to Cherokee, Darrell Johnson, of the North Carolina Committee of Employer Support of the Guard and Reserve (ESGR), awarded the Freedom Award Certificate and Above and Beyond Award to the tribe.

Employer Support of the Guard and Reserve (ESGR) is a Department of Defense agency established in 1972. The mission of ESGR is to gain and maintain employer support for Guard and Reserve service by recognizing outstanding support, increasing awareness of the law, and resolving conflict through mediation. ESGR volunteers provide free education, consultation, and if necessary mediation for employers of Guard and Reserve employees.