The Eastern Band of Cherokee Indians will play host to several tribal groups at the annual Festival of Native Peoples scheduled for Friday, Aug. 26 and Saturday, Aug. 27 at the Cherokee Indian Fairgrounds.    Groups from seven tribal groups, including two from Mexico, are slated to perform at the Festival. 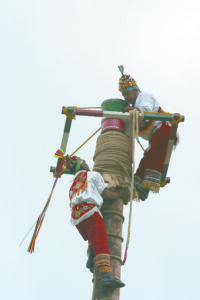 The Totonac Pole Flyers, from Vera Cruz, Mexico, perform at a previous Festival of Native Peoples. They are slated to perform again this year. (SCOTT MCKIE B.P./One Feather)

Jumper said the local economy sees a boost due to the event.  “Our local attractions report significant increases in attendance during the Festival of Native Peoples and travelers have come from all over the world to experience the event in previous years.  The performers from the various nations also experience the rich culture of the Cherokee people while in town.”

“Cherokee’s Festival of Native Peoples is a great event in a time of the year when tourism to our area begins to slow down as schools go back in session and the weather begins to turn cooler,” said Matthew Pegg, Cherokee Chamber of Commerce executive director.  “The festival provides a great late season boost to the hotels, restaurants and shops as participants typically are not local and need their services.”

“As far as a tourist draw, the Festival of Native Peoples is one of the best for people who want to experience the culture of various tribes.  It is one I look forward to every year.”