Nancy Bradley-Cox, an EBCI tribal member making her living as a basket maker and craftswoman, has had a hard time of it lately with several injuries and a bad housing situation.  But, she was on cloud nine as she became one of the first tenants in the Soco Creek Apartments. 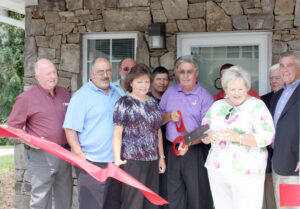 Bradley-Cox, who is nursing a fractured shoulder and two knee surgeries, said her previous place was overpriced and unkempt with little maintenance by the landlord.  “That place wasn’t fit to live in really.”

“Here (at Soco Creek), I’m in one of the handicapped buildings and that was a lot of help.  There’s more room and I can hang onto things when I go take my showers and go to the bathroom.  That’s a lot of help.” 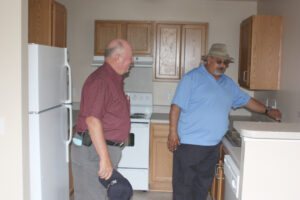 Deitz and Rep. Shell check out one of the three-bedroom units prior to the ribbon cutting on Thursday.

Vice Chief Larry Blythe told the crowd gathered for the grand opening that the Eastern Band of Cherokee Indians is the second tribe nationally to have a development like this on tribal property.  “It’s been a group effort.  This is the result of a lot of blood, sweat and tears.”

Vice Chief Blythe thanked Fred Mills, founder and manager of United Property Management, for his work on the project.  “Tribal Council saw the benefits.  Tribal Council stepped up and authorized the project, and then Fred stepped in and did his due diligence.  Personally, I want to thank Fred for having the confidence in us as a Tribe and us as a community.”

Vice Chief Blythe said Mills leases the property from the Tribe.  “That money is set aside for the Boys and Girls Club so they are beneficiaries of it.”

“The Tribe has very little money outlaid in this project.  I’ve always said I would rather spend someone else’s money instead of my own money,” he joked.

“It worked out and I couldn’t be prouder of how it’s turned out.”

The entire project, around $6.7 million in all, was funded through three sources including:  a first mortgage from CICCAR (Community Investment Corporation of the Carolinas) for $969,259; a $1.5 million North Carolina Tax Credit which is a 30-year deferred loan that will not have to be paid on for that period as long as the housing remains affordable; and the remaining $4.2 million from an exchange loan from the N.C. Housing Finance Agency.

According to information from the complex, “Each of the 60 units at Soco Creek Village features washer/dryer connections, an energy-efficient heat pump, walk-in closet, dishwasher, and mini blinds.  On-site community amenities include resident community center, computer lab, outside grilling area, and playground.”

The following floor plans are available: