Braves to kick off season at Smoky Mountain

Almost exactly one year ago, Cherokee Braves lineman Justice Littlejohn picked up a fumble and ran it in from one yard out for a touchdown in the season opener at home against Smoky Mountain.  That proved the difference as Cherokee beat the Mustangs 22-15 on that night. 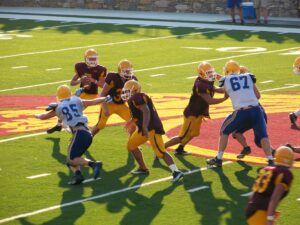 Cherokee QB Logan Woodard (#7) drops back for a pass during a scrimmage game against Gatlinburg-Pittman on Thursday, Aug. 11. (Photo by Denise Walkingstick)

This Friday, Aug. 19, the Braves travel to Smoky Mountain to open their season, and Cherokee hopes it’ll be a jump start to a great season.

“We’ve had a great off-season,” said Cherokee head coach Craig Barker who is entering his second season at the helm.  “The boys have worked really hard.  They’ve put a lot of time in the weight room.  We’ve got a great bunch of athletes with a great work ethic.”

He said the team will rely heavily on the run game, but will pass the ball as well.

Dorian Walkingstick, one of the state’s leading rushers last year, is back for his junior year.  He ended the 2010 season with 2,139 yards including 191 against the Mustangs.

When asked about his star rusher, Coach Barker commented, “He’s had a great offseason, gotten stronger, put on a little weight and we’re looking forward to seeing him get out there and do his thing.  He’s a great asset to have, and we’re going to utilize him to his utmost.”

Barker is pleased with the way things are shaping up on the other side of the ball as well.  “The defense is looking good.  You know, that was a sticky point for us last year.  We scored a lot of points, but we couldn’t stop anybody.”

He said they’ve got some hard hitters on the defensive side this year including Poncho Ramirez at linebacker, and the defensive scheme has changed back to a four-man front.

“I think it’s going to be a lot better.  We’re going to man up on defense and get after people.  We like to blitz and stunt and play a fast tempo defense.”

“It’s going to be a tough contest.  We respect Smoky Mountain.  They’ve got a great bunch of kids and great coaches so it’s going to be a great contest, but hopefully we can come out and we’re expecting a win.”

The Braves kick it off against the Mustangs at 7pm at Smoky Mountain High School in Sylva.