There are enough votes in the North Carolina State Senate to ratify an amended gaming compact allowing for table games at Harrah’s Cherokee Casino & Hotel according to two state senators who visited Cherokee on Wednesday, Aug. 10.  Phil Berger (R-Guilford, Rockingham), the President Pro Tempore in the State Senate, and Tom Apodaca (R-Buncombe, Henderson, Polk) visited with tribal officials on Wednesday and assured that the votes are there in the Senate to approve an amended compact once negotiations are complete between the Eastern Band of Cherokee Indians and Gov. Bev Perdue. 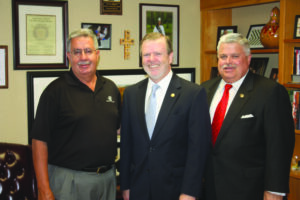 “There’s bipartisan support in the Senate,” said Berger.  “The votes are there.”

A study released by the UNC Kenan Flagler School of Business related that Harrah’s Cherokee Casino & Hotel pours over $380 million into the area economy annually.

Apodaca said most of the concerns in Raleigh on allowing table games at Harrah’s Cherokee have been answered.  “There were more questions about alcohol than gaming, and those concerns have been addressed.  All of the answers have been positive answers.”

“We would like to see this happen sooner rather than later.”

The General Assembly of North Carolina passed a Joint Resolution (938) on Thursday, July 28 declaring which legislation and bills they will consider when they reconvene in September, and “Bills to ratify and make statutory conforming changes pursuant to a Tribal Compact negotiated by the Governor” was included.

“It was an honor to welcome Senate President Berger and Senator Apodaca back to Cherokee,” said Principal Chief Michell Hicks.  “They are friends who visit often. This visit was to provide reassurance of their commitment to bring table games to the casino.  They assured me that they were prepared to consider an amended Tribal Gaming Compact when the Senate reconvenes Sept. 12.”

“Discussions with the Governor continue to go well and I am confident that we will have a proposal for the General assembly to consider on Sept. 12. Senators Berger and Apodaca indicated that a majority of their colleagues in the senate support our efforts. I am grateful for their support and leadership and look forward to live dealers coming soon to Cherokee.”

The Civitas Institute released a poll on Thursday, July 28 stating that sixty-four percent (64%) of North Carolina voters support the idea of the casino having live dealers for blackjack and poker.

“This shows very strong voter support for allowing the Cherokee Nation to negotiate a new compact with North Carolina to allow Las Vegas style gambling,” said Francis De Luca, Civitas Institute president.  “At a minimum, this poll shows that the lure of jobs outweighs concerns over the social costs.  This could be another sign of how much North Carolina has changed demographically and socially.”

A couple of weeks ago, Christine Mackey, Gov. Perdue’s press secretary, told the One Feather, “Gov. Perdue is focused on promoting economic development and job creation throughout North Carolina.  “The Eastern Band of Cherokee approached the Governor’s Office because they wanted to negotiate with us to expand the current Compact to allow table gaming.  The expansion that the Cherokee proposed could create hundreds of jobs in western North Carolina.”