Experts help in discussions on Constitution

The Governing Documents Review Committee, working to develop a Constitution for the Eastern Band of Cherokee Indians, received the help and advice from three noted authorities on tribal constitutions during a meeting held on Wednesday, Aug. 10 in the Ginger Lynn Welch conference room.

Sherry Salway Black, Manley A. Begay, Jr. and Frank Ettawageshik visited Cherokee and shared their knowledge with the group.

“We have to have capable, strong governments representing the people,” said Black, an Oglala Lakota who serves as the director of NCAI’s Partnership for Tribal Governance Initiative.  “In the post-determination era, tribes are really developing their governments.  We’re seeing quite a few tribes going through tribal constitutional reforms.”

Black commented, “Your process is unique, but you may be able to learn from other tribes that have done this.  You’ve done an amazing job in your process so far.  Just documenting that history is so far beyond what most tribes have done.” 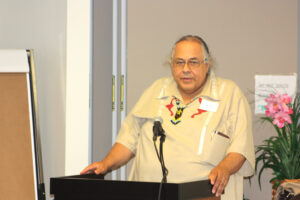 Begay, Navajo, is the faculty chair at the Native Nations Institute at the University of Arizona.  “All tribes have sovereignty, but not all exercise sovereignty.  You have to exercise your sovereignty muscles.”

He said the overall goal of any tribal nation is to create a stable environment that will facilitate long-term planning.  “Those Indian tribes that are planning for 50 to 100 years down the road are faring much better.”

Begay took the group through a series of questions that each community must ask itself when  tackling constitutional reform.  “The question is do you have a set of governmental tools to meet the challenges you face?  And, what are the challenges?”

“Who’s the self in self-government?  Who is the Eastern Band of Cherokee Indians?  What does that mean?  What are you all about?” 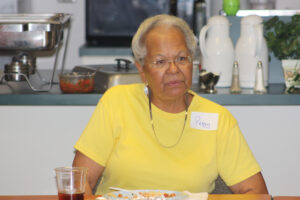 Peggy Hill, from the Yellowhill Community, has been active in the EBCI Governing Documents Review Committee.

Begay related that when developing a constitution’s legitimacy, it must meet two requirements:  (1) it must be a cultural match for the tribe and (2) it must work.

He touched some on developing branches of government and said that a three-branch government is the norm but not always the case in Indian Country.  “Right now, a lot of Indian nations are constituting a fourth branch.  San Carlos Apache has an Elders Council.”

Begay said that an Elders Council or fourth branch of government has been utilized by some tribes to deal with cultural matters such as language and sacred sites.

“A separation of powers is absolutely critical,” he stressed.  “And, there has to be a checks and balances system.”

Ettawageshik served in several leadership positions including chairman of the Little Traverse Bay Bands of Odawa Indians and currently is the executive director of United Tribes of Michigan.  He helped his tribe through constitutional reform – a process that took 12 years from start to finish.

Ettawageshik urged the group to not get too specific when drafting a constitution for the EBCI.  “A shorter document tends to be better.  If something doesn’t work quite well, you can amend the law without having to amend the constitution.”

Begay added, “Write it so it reflects you as a people.”

Painttown Rep. Terri Henry thanked the presenters for challenging her visions of the process.  “We are at a crossroads with our governance.  We have a tremendous legacy to think forward of where we are now and where we’ll be in the future.”

She said the current Charter and Governing Document is not adequate for modern-day Cherokee.  “This document is not enough for us to deal with what we have to deal with.  We have come to an impasse.  We need solid, foundational direction and now is the time to address that.”