Students and teachers from the Cherokee language camp in Robbinsville, led by Shirley Oswalt, participated in a breeding bird sample survey at the Tribe’s Cowee Mound property in Macon County on Saturday, July 9. The event proved to be an excellent opportunity for the students to familiarize themselves with native bird species, the traditional Cherokee names for these birds, and with the historic property now owned by the Tribe. 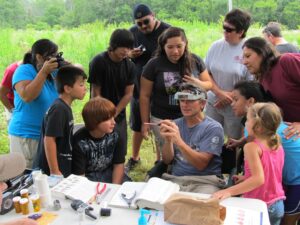 The bird survey was an initial effort in what is hoped to be a long-term monitoring station established at the site. The survey was conducted by staff from Southern Appalachian Raptor Research (SARR), a local non-profit group dedicated to the conservation and protection of birds of prey in the southern Appalachians through monitoring, education and field research. Mike LaVoie, of EBCI’s Fisheries and Wildlife Management program, also participated in the event, as did staff from the Land Trust for the Little Tennessee (LTLT), which has been collaborating with the Tribe on the management of the property.

The survey is part of a nationwide program known MAPS (Monitoring Avian Productivity and Survivorship) that is coordinated by the Institute for Bird Populations to monitor the health of breeding birds throughout North America. Last year, SARR established a MAPS station at LTLT’s Tessentee Bottomland Preserve in southern Macon County, and is continuing that work this summer.

According to LaVoie, “We chose the Cowee Mound site due to its diverse mix of early successional habitat along the floodplain. Such habitat has been disappearing throughout the Southeastern U.S., yet is critical for the survival of many of our native wildlife species. A MAPS station located at Cowee can provide us information to improve our management of the property, especially in view of ongoing changes to our landscape due to climate change.”

Cowee is considered one of the most significant archaeological sites of the Mississippian period in North Carolina, when intensive agriculture first became established in the region. Pollen sampling has verified the presence of agriculture on these bottomlands dating back at least 3,000 years. The mound is thought to date from approximately 600 AD. The council house of the Cherokee town of Cowee was located on this mound in the 18th century, at which time the town of Cowee served as the principal diplomatic and commercial center of the mountain Cherokee. For this reason, Cowee was also the center of significant historic events on the eve of the American Revolution in the South, including the target of the Rutherford Expedition in September 1776.

The 70-acre Tribal property along the Little Tennessee River encompasses Cowee Mound and Village Site, which was placed on the National Register of Historic Places in 1973. The property was purchased by the EBCI in early 2007 with assistance from the Land Trust for the Little Tennessee and the NC Clean Water Management Trust Fund. The latter holds a conservation easement on the property that permanently protects its conservation values and prevents commercial and residential development.