A recent UNC study details the impact that Harrah’s Cherokee Casino & Hotel has had on the Cherokee Indian Reservation and the surrounding area.  According to the study by UNC’s Kenan-Flagler Business School entitled “Assessing the Economic and Non-Economic Impacts of Harrah’s Cherokee Casino, North Carolina”, the casino pours over $380 million into the area economy annually. 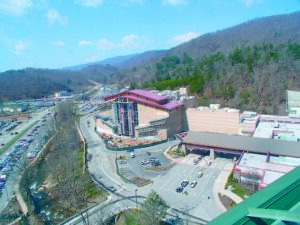 “Intuitively, those of us on the Qualla Boundary and in WNC have had a good sense of the casino’s impact, both economic and non-economic,” said Susan Jenkins, Cherokee Preservation Foundation executive director, “but, I think it’s very important to actually measure results about every ten years, and we felt it was also very important for those in Raleigh and other parts of the state to understand the value of gaming in Cherokee to all of North Carolina.”

“The impact to the local business community of Harrah’s in Cherokee has been tremendous,” said Matthew Pegg, Cherokee Chamber of Commerce executive director.  “Prior to the construction of Harrah’s, the traditional visitor to Cherokee arrived looking for history and culture or outdoor activities.  The addition of Harrah’s to the region brought a whole new type of visitor.  This new visitor eats in our restaurants, shops in our stores and adds to our local economy.”

“So, while there is direct revenue to the casino,” Pegg related, “the Cherokee business community has also benefited.  Where else in the southeast can you go fishing for trophy-sized trout in the morning, visit the top-of-the-line Museum of the Cherokee Indian in the afternoon, and enjoy a nationally-known concert in a world-class Event Center in the evening besides Cherokee, North Carolina?”

The casino is responsible for five percent of employment (1,674 employees as of 2009) in Jackson and Swain counties and accounts for eight percent of wages and salaries, the study states.

“An estimated (in 2009) $52.4 million wage and salary income was fed into the local economy,” the study says.  “Household spending generated an additional $8.3 million in economic output for a total employee compensation impact of $60.7 million in Jackson and Swain Counties.”

Jenkins is proud of the impact that the Cherokee Preservation Foundation, which has received $67 million as of the end of FY 2009, has had on the area.

“We have made a total of 661 grants totaling nearly $51 million, and each dollar has been matched by an average of $1.64 in support from other nonprofit or government sources,” she said.  “Over half o those grant funds have gone to cultural preservation, another third for economic development and the rest for environmental preservation.”

“The great work our grantees are doing with these funds has had a tremendous non-economic impact on the Qualla Boundary and the seven county region.”

But, all in the report isn’t rosy.

The study looked at graduation and dropout rates for area high schools including Cherokee High School.  For a complete analysis of this aspect of the study – https://www.theonefeather.com/2011/07/25/chs-improves-graduation-dropout-rates/