Cherokee High School had a graduation rate for the 2010-11 school year of 78.82 percent that was higher than the state (72.8 percent) and national average (71.7 percent) according to school officials.  That rate marks a vast improvement for the school which recorded a 49.59 percent graduation rate the year before.

Cherokee’s graduation and dropout rates were brought to light a few weeks ago with the release of a report entitled “Assessing the Economic and Non-Economic Impacts of Harrah’s Cherokee Casino, North Carolina” that was prepared by UNC’s Kenan-Flagler Business School.

In addition to reviewing the overall impact Harrah’s Cherokee Casino has made to the surrounding area, the study looked at graduation and dropout rates for area high schools including Cherokee High School.  The state dropout rate for 1997-98 was 3.43.  A decade later, in 2007-08, the rate remained just about unchanged at 3.4. 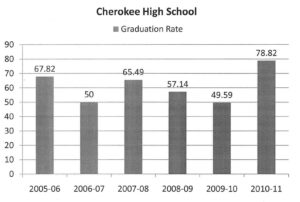 “We, the staff, will do whatever it takes to make our students successful,” he said.  “My staff is awesome.  Our goal is to be the best.”

“I think our staff has some high expectations, and we’ve made a lot of changes,” Ormsby added.  “But, also the staff that’s been here awhile, I think they’ve changed and their expectations of the child have changed.”

“We want to provide as many safety nets as we can while maintaining those high expectations.”

Ormsby and Foerst related that many new programs have been implemented to help  students achieve including:  starting introduction classes to Algebra I & II and Geometry, making English I & II year-long classes, making tutoring available at the end of the school day for all students and making it mandatory for student-athletes, and increasing communication with parents.

Foerst said the students are taking more of an ownership in their own education.  “They’re stepping up.  They’re interested in knowing what their scores are the minute we know what they are.”

She said a few years ago the environment was much different.  “I think there’s a stronger sense of self-efficacy among the students and the teachers as well.”