This elaborate carving by the late Amanda Crowe is one of several carvings by Cherokee artists featured in a traveling exhibit from the Asheville Art Musem. (Photos contributed)

Works by 16 Cherokee carvers living and working in western North Carolina are showcased in Cherokee Carvers: Tradition Renewed, a traveling exhibit from the Asheville Art Museum. Opening Friday, Aug. 5, at the N.C. Museum of History in Raleigh, the exhibit features 44 wood and stone carvings that illustrate centuries of continuity and change in Cherokee techniques. Ritual items, functional wares, and pieces designed to be sold to tourists and collectors appear in this exhibit that will run through Nov. 30, 2011. Admission is free.

Noted Cherokee carver Amanda Crowe (1928-2004) taught many of the artists featured in the exhibit, and her carving “Bear Tree” is on view. A major influence on contemporary Cherokee artists, she taught art and wood carving at Cherokee schools for nearly 40 years. Crowe grew up in Cherokee, earned degrees from DePaul University and the Art Institute of Chicago, and studied with sculptor Jose de Creeft at Institute Allende in Mexico. 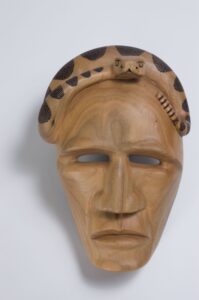 A mask carved by Virgil Crowe

In the exhibit, quotes from each artist add insight into their lives and work. Some artists refer to the inspiration and instruction they received from Amanda Crowe. Others, such as Joel Queen, focus on their carvings.

Noted Queen, “I wanted to bring a new style to Cherokee, one that nobody had done. . . .  I really wanted to put art from the Southeast back on the map.” His style is evident in the decorative pieces “Woman of the Long Hair,” “Lovers,” and “Birth of the Moon.”

Other objects in Cherokee Carvers range from a “Rattlesnake Mask” by Virgil Crowe to functional items — a spear, hickory bow and arrow, and tomahawk — by Stan Tooni Sr. 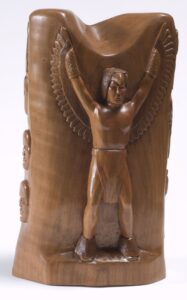 A piece by Stan Tooni, Jr.

Join a special event, the exhibit opening of Cherokee Carvers, on Friday, Aug. 5, from 6 to 8 p.m. Enjoy light refreshments and watch a carving demonstration by Freeman Owle, whose stone carvings are featured in the exhibit.

For more information call 919-807-7900 or access ncmuseumofhistory.org or Facebook. The museum is located at 5 E. Edenton Street, across from the State Capitol. Parking is available in the lot across Wilmington Street.