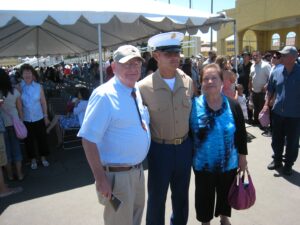 Curry is shown with his grandparents, Bob and Laura Blankenship. (Photo courtesy of Blankenship Family)

“During the past twelve weeks, your young man has been prepared physically, mentally, and emotionally in a time-tested process whereby he has been transformed from civilian to Marine.” “He has labored intensively for the past three months; personally sacrificing much in the process to ensure each new Marine is instilled with the essential fitness, character, and values necessary for success on and off the battlefield.”

“Each of the new Marines recognized today has met the test, exceeded the standards and earned the title Marine.  The lessons learned in recruit training, coupled with these core values, will serve them well for their time in the Marine Corps… and for the rest of their lives. Several family members attended the graduation from Oklahoma, Cherokee and Texas and all of Curry’s family is extremely proud of him.”