A man wanted for first degree murder in Tennessee has been apprehended in Cherokee.  David Keith Daugherty, 41, has been charged in the murder of his wife Elizabeth Annette Carney, 40, in Bradley County, Tenn.  He fled the area and was apprehended by Cherokee Indian Police officers on Thursday, July 14 at around 5:30pm at Cooper’s Produce on Hwy 441. 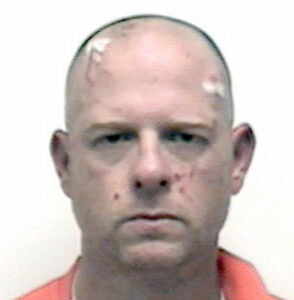 Prior to the apprehension, Cherokee Police officers responded to a call of an assault at the Pageant Inn Motel.  “Upon arrival, officers spoke with a female victim who stated that a white male posed as a motel employee to gain access to her room, attacked her, then fled when the victim’s daughter ran to the front office for help,” information from the CIPD stated.

That’s when CIPD officers apprehended him at the business not far from the motel.

The Bradley County Sheriff’s Office (BCSO) commented, “On July 12 at 10:35pm, units responded to 1235 6th St. N.E. in Bradley County, Tennessee to investigate a possible missing person.  While en route to the location, the BCSO received another call stating that family/friends of Mrs. Carney had located her deceased in the residence.”

BCSO officials related that the body has been sent to Knoxville for an autopsy.  “At this time, we do not know any details as to how Mrs. Carney died,” BCSO officials stated.

Daugherty has a long prior criminal history including a conviction of voluntary manslaughter in 1990 after he shot and killed used car salesman Larry McKinney.  Daugherty served five years of an 11 year sentence in that case.

CIPD officials related that Daugherty is in custody awaiting extradition to Tennessee.