Haydn Comingdeer (center), a Cherokee Nation citizen, rides into Tahlequah on the last leg of the 2011 Remember the Removal Bicycle Ride. (Photos courtesy of Jody Bradley)

TEXT and PHOTOS By JODY BRADLEY

We waited patiently at the Cherokee Nation Courthouse for the sound of a bullhorn to let us know where the riders were.  The families and friends of sixteen riders, some with tears in their eyes, longing in the hearts, planning where to stand for the best vantage point. 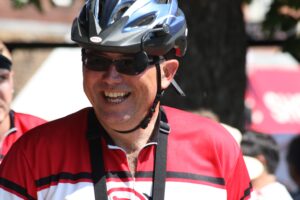 As the riders entered the square, shouts of joy filled the air.  They circled the block for a victory lap and entered the Cherokee Nation Courthouse square.  During the ceremony, words like family, survivor, endurance, resilience, adversity, strength, were used to describe their journey and the journey of our ancestors.

Each rider shared some of their heartfelt experiences, trials, and tribulations, with a crowd of over 200 Cherokee people from the East and West.  They kept reminding us that while their bike trip was challenging, it was nothing compared to the challenge our ancestor faced walking to Oklahoma. At times there was not a dry eye on the square.   The word “family” and the bonds that were made was mentioned by every rider. There was no Eastern, no Western.  As one rider put it, “it was a great day to be a Cherokee!”. 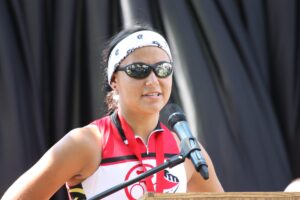 Cherokee Nation Principal Chief Chad Smith presented each rider with a medal, photographs, their genealogy while family members lavished them with hugs and kisses.  A Hog Fry was held on the square following the ceremony.   The riders introduced their families to each other and friends made.  One of the Cherokee Nation riders said this was a harder ride because they were coming home, but they would miss their Eastern Cherokee family. The Cherokee Nations uses this event to develop leadership in its young people.

This ride accomplished that mission and more.  It helped remind us all the riders that we are still connected even though there are miles between us and the bond was made stronger by this ride. 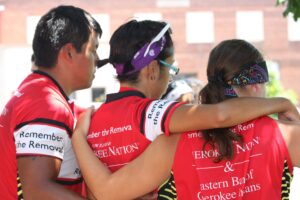 As we travel back to the mountains you could hear riders discuss their experiences with their families.  You could feel the bonds and sense the camaraderie they developed with their fellow riders.

You could also feel the sadness in leaving Tahlequah as if they’d left a part of them behind and wondering what’s next.  We kept reminding ourselves that our ancestors felt a greater sense of loss and separation than we could ever imagine.  We Remember the Removal with a greater awareness of our brother and sisters of the Cherokee Nation, a hunger to know more, to fill in the gaps, and retrace the Trail ourselves, ensuring that WE NEVER FORGET.