Betty and I attended the F Body Gathering (G-15) again this year at the Marriott Northwest Atlanta over Memorial Weekend. It is a yearly event/car show for all year Camaro and Firebird owners. The show is the longest running (15 years) and largest show of its type in the southeast US. We earned Class Winner for our 1986 Pontiac Firebird Trans AM. 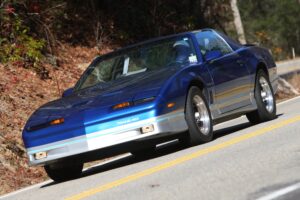 The car originally belonged to Amanda Crowe of Cherokee.  Crowe purchased the car new from Harry’s Pontiac in Asheville and used it as her “Sunday Afternoon Car.” Many people around Cherokee have told me that they remembered seeing Amanda driving the car, and seeing it at Cherokee High School. It is bright blue with silver graphics. The car was apparently very popular with the high school students, as most of the students wanted it.  After Crowe passed away, the car was sold.

Betty bought the car for me for my 50th birthday in 2006. The car had 25,000 actual miles on it, but had fallen into disrepair during the period of Crowe’s illness. I originally planned to strip the car down to make it into an Autocross Racer, but discovered that it had too much potential to modify it. It also has some rare factory variations and options making it somewhat collectable.

The following few years were spent restoring it to all-original condition. I even managed to obtain copies of all of the records for the car, including the factory build sheet from when the car was nothing but an order on the assembly line. We first entered the car into the Atlanta show competition in 2009, sort of as a lark, but never expected to win anything. The car placed Class Winner for 2009, and we were both surprised and shocked.

In 2010, the car earned Class Winner again, and was also awarded “Best Firebird” by Scott Settlemire of the General Motors Product Development Department, which was the second place spot for the entire show. There were 350 entrants in competition. Settlemire is known as the “F Bod Father” as he was the lead engineer on the team who developed the current Camaro cars.

We call the car “Amanda” in honor of Crowe. The car was her pride and joy for many years, and up until the time when she became sick had been well maintained. I knew Amanda briefly before she passed away, and we had spoken of her extensive car collection. I have spoken to some of her family members over the years, who have expressed that they feel sure that Amanda would be happy knowing that her “Sunday Afternoon Car” lives on today as a show car. The car currently has 29,300 miles on it, and rides around in an enclosed trailer to events.  If anyone wants to look at the website, it is Fbodygathering.com Compared to the important events of daily life this is very small and unimportant, however it is fun, harmless, and sort of cool.  Hope it brings back memories.

Charles is a RN on Inpatient at Cherokee Indian Hospital.